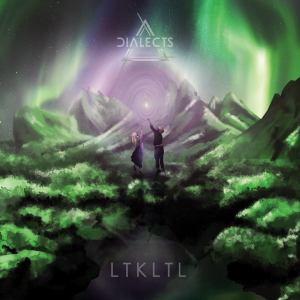 We first covered Dialects back in July last year when they unveiled their video for ‘Unknown Orbit’. Now they finally release this song as part of their debut EP ‘LTKLTL’ – or ‘Let the Kids Light these Lanterns’ if you’re not a fan of acronyms. Based in Glasgow, the experimental four-piece have recently been on tour with Mutiny on the Bounty and have also played a number of shows with other Spectral Nights favourites Waking Aida and other stars of the math-rock spectrum including Maybeshewill, Flood of Red and Lite.

‘Restless Earth’ fools you with a very minimalist and understated opening 10 seconds. This subtlety doesn’t last long – frenetic, futuristic and ear-pulsatingly loud guitars are brought in with a bang to welcome you into the world of Dialects. Leaning towards the more accessible side of math rock at first, there’s a change in direction to something all the more aggressive around the 2 ½-minute mark which brings to mind Brontide or a slightly less quirky Three Trapped Tigers. As the song enters its final throes, the guitar lines are given more of a sheen thanks to Nick Lawrie’s perfect production. After a song title that references Earth, it’s only natural Dialects head further afield next with the previously mentioned ‘Unknown Orbit’ – a riff-laden song that does not do anything by half-measure, recalling everyone from Flood Red to Oceansize in its five minutes.

Prog and pedals are two elements that Dialects are not afraid to indulge in and ‘Good Luck Felix’ is a song that dips into both. Perhaps more considered and reflective than has been shown so far on the EP it has finger-tapped guitars and a slow build-up akin to the giants of post-rock. For the first time, vocals are added into the mix but are embedded deep into the mix of clattering drums, poised guitars and driving bass. There’s also some dual guitar interplay to add even more gusto. ‘Let the Kids’ is more brutal with its contrasting guitar riffs and alluring rhythm section in its opening minute or two but then it settles into something more measured, recalling the likes of Yndi Halda or Youthmovies in the process.

The closing ‘Spectacular Supernovae’ opens with an intelligent guitar blast that early Bloc Party would have been proud of. However, it moves on from this more straight-up indie-rock sound into something more sweeping and crazy like the Physics House Band. The bass will shake your body to the core, especially if you’re listening loud through headphones (clearly the best way to experience Dialects…) and then the effects- and pedals-laden guitar riffs and distortion-lead crescendo provide extra impetus to the EP’s big ending.

On this EP, the band have not only lived up to the promise of ‘Unknown Orbit’ but expanded on it in some style. Loud, experimental and never less than exciting – the post- and math-rock community will be hearing more from Dialects and that’s something to delight in.