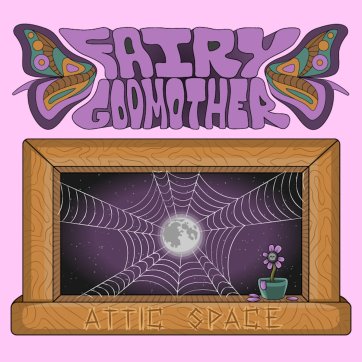 The latest EP release from our friends at Fox Food Records is Fairy Godmother’s ‘Attic Space’. Available on limited-edition cassette, it contains six lo-fi songs full of heart and honesty. Opening with a burst of ambient noise and chatter that sets the scene perfectly, you first hear Alyssa Thomas’s lilting vocals on second track ‘Tell on Me’. This song combines gentle electronica with sweeping Beach House-style atmospherics before evolving into a poppier sound.

‘God Damn’ is next up and this is the kind of song you could imagine airing in the Bang Bang Bar scenes during the third season of Twin Peaks. It’s dreamy but glacial and has a rawness that is oh-so powerful, especially when Alyssa sings: ‘You make it so god damn hard on me’. Following this is the sparse and slow-burning ‘Maybe’, which has elements of alt-country as she ponders about learning to shut her mouth.

The EP reaches its final throes with the double-whammy of ‘Berwyn’ and ‘Pretty’. The former is a delicate Soccer Mommy-esque tale of moving away from home and feeling alone in an unfamiliar new city (‘I’m reaching out for you because I miss you so much. I’m reaching out for you because there’s nothing left to touch’) that will leave you on the verge of tears, while ‘Pretty’ features an enticing electric riff that offers a sense of urgency. It finds Alyssa talking about worries and anxieties with quivering vocals as she urges you to ‘turn the lights out’ and asks if you trust her. But this is all wrapped up in so much warmth: ‘You’re so pretty when you worry’.

This Fairy Godmother is one you’ll want to call upon time and time again.