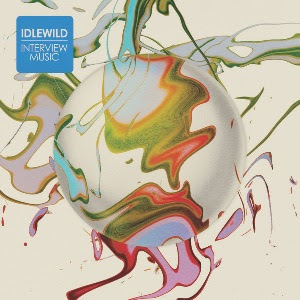 Idlewild made a welcome return with 2015’s ‘Everything Ever Written’ – an album that hit the top 20 and saw them play the biggest venues in their career to date. Now the Scottish indie legends are back once more with ‘Interview Music’, a record they started to scrobble down ideas for shortly after the release of ‘Everything Ever Written’. A meeting with ‘100 Broken Windows’ and ‘The Remote Part’ producer Dave Eringa following an anniversary show for the latter album helped the band finish this record (Dave produces five of the songs).

The record opens with recent single ‘Dream Variations’, a song that veers from a ‘traditional’ Idlewild single into something akin to Scott Walker and the Beach Boys’ more psychedelic moments. As well as anthemic hooks from Rod Jones, there are neat call-and-response lyrics throughout ‘There’s a Place for Everything’ as Roddy Woomble sings about how it’s ‘Just a matter of time’ and offers mindful musings: ‘It’s easy to choose solitude but you’ll feel much better when you feel surrounded by life. So don’t isolate yourself on an island half of the time’; ‘No one is an expert in everything’; ‘Existence isn’t always everything’.

The instant earworm title track ‘Interview Music’ opens with thunderous drums and stabs at a piano before grunge-inspired riffs (Rod clearly enjoying going back to the band’s roots) join the fray as Roddy continues to offer oblique observations: ‘While you were falling, did it feel like you were floating?’ Halfway through the song, the guitars are turned up even more and it ends in fuzzy Dinosaur Jr style. It’s at this point you’ll realise these about-turns are a defining feature of the record, with the following ‘All These Words’ following an Americana-inspired sing-along chorus, ‘Mount Analogue’ featuring moments of abstract jazz and ‘I Almost Didn’t Notice’s thrilling combination of strings, feedback and drone. This dreamy and reflective song is packed with metaphors based around the weather (‘I mistook the sound of ice breaking for the scattered remains of the sun’) and poignant observations: ‘I’m drinking in the cafe. Sat over by the window. Another cup of coffee won’t decaffeinate my soul’; ‘This feeling of hope. It’s perfect for a restless soul, like the classic mix of poetry into rock and roll’.

‘Forever New’ brings to mind latter-day R.E.M. with its perfectly pitched views on love (‘Some say falling in love is like asking to forgive your own drunk reflection in the bar-room window. And some of us try to be safe from this confusion’) and Peter Buck-esque guitar work, while ‘Bad Logic’ is a rally against the way the past tries to catch up with you at the most inconvenient time: ‘No, the past is not dead, it’s just living with us. It’s trying to reach us’. The penultimate ‘Familiar to Ignore’ starts off as a heartbreaking piano ballad with reflections on the passing of the seasons (‘The spring does not lead to the summer. It’s spring and then it’s winter again’) before veering into delicious power-pop territory after an expertly placed breakdown and the closing ‘Lake Martinez’ has a glacial feel as Roddy talks about feeling desolate when trying to be there for others: ‘You pick up on the lonely loneliness of the people all around you but you don’t know what they’re thinking. No, you will never understand’.

With its weaving through genres and emotional tidbits, ‘Interview Music’ is an album that will get you talking about Idlewild once again. It’s the sound of a fully committed band having fun – and inviting you to join them – while losing none of their emotional poise.