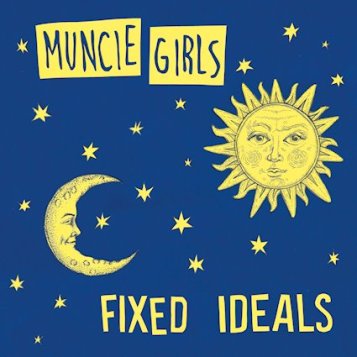 Following their widely acclaimed debut album ‘From Caplan to Belsize’ and countless tours around the UK sharing stages with everyone from Los Campesinos! to Jeremy Corbyn, Muncie Girls have made a welcome return with ‘Fixed Ideals’. Once again produced by Lewis Johns and with a title taken from a Sylvia Plath poem, the Specialist Subject Records release finds Lande Hekt talking about her personal relationips and the effects of anxiety, mental health and drinking .

Despite being a trio, Muncie Girls recorded this album as a four-piece with Lande adding an extra guitar to give their songs a heavier and fuller sound – and this is certainly the case on opener ‘Jeremy’. Based on unhappy experiences with her own right-wing father and his behaviour, the song finds Lande stating how she’s ‘hoping things get better’ before then telling him: ‘I’m so angry I’m going to get a tattoo that says ‘fuck Jeremy Clarkson’ and fuck you, too’. However, she also celebrates the positive influence of other family members with lyrics like: ‘If I read enough books, I could be smart like my sister’. Lande said she was listening to bands like The Pastels and The Replacements while writing this album and you can hear this new direction on songs like the Gaslight-esque ‘High’ and Tigers Jaw-meets-‘So Here We Are’-era Bloc Party ‘Falling Down’, the latter of which has a powerful and sad message about how ”I’m gonna stop smiling when it doesn’t feel like the right thing’.

‘Clinic’ was written by Lande after she called the the NHS’s Depression and Anxiety Service with regards to her own mental health. She celebrates the work they do but also how incredibly underfunded this hugely important service is. It has punky riffs backing up overviews of the treatment: ‘Think of everything that’s stressful and start a list. I thought, yeah, if I could actually see my life maybe I could compartmentalise the dark and the light’. Midway through the album is ‘Bubble Bath’, a song that combines powerful, visceral lyrics (‘Happiness went away like the 7th May, colour drained out of the sky’ with bathtub sounds and an earworm of a chorus: ‘I was so young to feel so low and I was never scared of second-hand smoke. I remember saying that I was gonna give up eating animals’.

The frenetic and pacy ‘Fig Tree’ finds Lande despairing at the ignorance of ‘those blokes who would laugh at sexist jokes. He’d like a pint of imported lager, didn’t like anyone with an imported father’ (she then goes on to state how he is also ‘one of those blokes who couldn’t keep his hands to himself. I could feel my stomach turning as he told me about his monthly earnings’). Immediately following this is the fuzzed-up guitar burst of ‘Locked Up’, a rally against the things that are constantly sold to us as good for the heart, sould and mind: ‘When I was a kid I used to play in a fountain, now you’re not cool unless you’re calorie counting’

There’s a real poignancy as the album enters its final throes; ‘In Between Bands’ is an evocative account of what the Exeter Cavern meant to Muncie Girls (regarding the fire that engulfed it: ‘I haven’t been down to see it but I’ve heard it’s bad. I can barely fucking believe it’) and how watching and playing gigs there have helped them – as people and in their craft, while ‘Laugh Again’ is an ode to the importance of friendship and how being there for someone, no matter what, is incredibly important: ‘Maybe I could come over. We can drink all night unless you want to stay sober’; ‘I want to see you laughing again, my friend’. The album closes with ‘Family of Four’, a poignant song about Lande’s time growing up in a family raised by a single mother.

With ‘Fixed Ideals’, Muncie Girls have expanded upon their sound while continuing to deliver important messages about life, health and friendship.