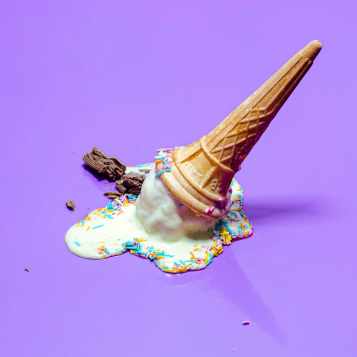 New Alcopop! Records signings False Advertising follow a number of well-received festival appearances and tour supports with new album ‘Brainfreeze’. Jen Hingley from the Manchester trio says that ‘This band is about connecting with people, but it’s also a very personal catharsis. With ‘Brainfreeze’, I really want peole to feel like it’s inclusive’.

With songs written by both Jen and Chris Warr, the album opens with the crunchy riffs of recent single ‘Influenza’. Bringing to mind Dinosaur Pile-up, the song is full of conflicting messages as Jen first says ‘Hang around after midnight, I am your excuse’ before declaring ‘I won’t go back to you’ and then saying ‘Don’t know what I’m doing but I love you’. ‘You Said’ has an intense introduction with lyrics spat out with venom: ‘You’re such an expert’; ‘I’m sick of waiting, so sick of being here now. I don’t know why you stay’. After a spectacular breakdown, it’s followed by the grunge-tinged ‘Uncomfortable’ which finds Jen delivering harsh truths and explaining how someone’s actions continuously make her uncomfortable: ‘Whats the part in being so difficult in the way we have seen?’

‘Reading it Wrong’ is a more slow-burning bass-led song with promises of following someone and heartfelt pleas of ‘just tell me it meant something’. ‘You Won’t Feel Love’ has a potent guitar, clattering drums and punky singalong moments while ‘Personal Gain’ finds the band veering into an early Britpop sound that reminded us of Blur or Carter USM. ‘At the Top’ is another track with a DIY feel as riffs come in with intent before it moves into more experimental territory while  ‘So Long’ has a fitting big sound to finish the album with a flourish and repeated words of advice to ‘breathe.

There’s nothing false about this album… It’s full of genuine heart and huge riffs.