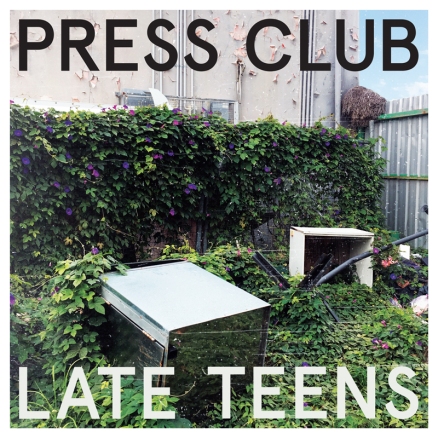 Daniel P. Carter’s favourites Press Club have toured with bands as varied as Joyce Manor, Cloud Nothings and The Smith Street Band and now the Melbourne band have signed to the ever-reliable Hassle Records to release their debut album, ‘Late Teens’.

There’s an anthem-in-waiting on the opening ‘Crash’. It’s packed with feedback, resounding drums and dripping atmosphere – and then Natalie Foster delivers her opening lines with a flourish. As melodic guitars capture the spirit of Saves the Day surround her, she passionately states ‘there’s no easy way to let you down, everybody’s getting older now’ before a tinge of sadness takes over and she ponders how ‘I’m always on the other side’. Recent single ‘Headwreck’ follows, offering a valuable lesson in respect amidst a potent combination of Gaslight Anthem and Marmozets and what should be one of 2019’s favourite scream-alongs: ‘Don’t be that guy’.

Things are slowed down with ‘Suburbia’, which acts as an ode to hometowns and discusses how sometimes there really is no place like home. As the song ups the tempo and power-pop riffs start to appear, the lyrics reveal how some things do not always live up to your dreams. ‘My Body’s Changing’ is short, sharp and motivational with a defining statement of ‘Give up or give in. You get what you give in’ while ‘Golden State’ appears to be inspired by classic ’90s grunge.

‘Ignorance’ finds the band back in garage rock territory with its huge hooks and clattering rhythm section plus a healthy dose of nostalgia as Natalie sings about ‘young hearts’ and getting it all wrong. This song has the same kind of heart-on-the-sleeve attitude that served fellow countrymen Trophy Eyes so well on last year’s ‘The American Dream’. ‘Trading Punches’ is the third in a run of two-and-a-half-minute songs and is all about trying to ignore the haters and think more positively: ‘I know it’s easy to give up when you’re sinking’. The closing ‘Stay Low’ also talks about leaving home and not being able to sleep as you start to feel let down and has a very moving finish with the final line: ‘I fear I’ll stay low’.

Press Club are more than a band you’ll want to be reading about. Sign up and listen now!