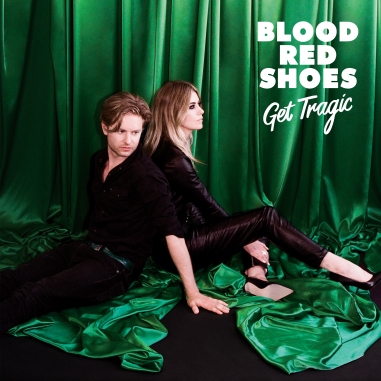 Laura Mary-Carter and Steven Ansell have been recording and touring as Blood Red Shoes for a long time and at the end of the promotional run for 2014’s self-titled record, the band threatened to implode. The duo decided they’d seen enough of each other and needed a break – Laura booked a one-way ticket to Los Angeles and Steven ‘went out and took drugs and went clubbing for about half a year’…

After eventually reconnecting and going through broken bones and romantic break-ups, the friends took stock of their action and thought ‘Get Tragic’ kind of summed up how they’d acted and became the major theme running through every song. Dropping the self-imposed two-piece rule, writing in rural Wales and recording with Nick Launey (Yeah Yeah Yeahs, Nick Cave) in the States, the album promises a new, exciting and more expansive sound for Blood Red Shoes.

‘Eye to Eye’ signals the brave new world of Blood Red Shoes – one full of synths that offer the same kind of sensuality that served St. Vincent so well on ‘Masseduction’. Laura and Steven sing about how ‘we don’t see eye to eye’ and we’re not sure if it’s a celebration of their differences or a comment on wider society. There’s a spikiness to many of the lyrics with Laura lamenting the fact ‘You go missing when you get bored. You never like to be ignored’ and then both members shouting ‘shoot me down’ before it comes to a sudden stop. The danceable art pop of ‘Mexican Dress’ follows with talk of the country, punk shows and generally just having enough of people (‘Hey, there’s only so much I can take’; ‘You’ve always got to be the one that’s sitting in the front seat singing these songs’).

There are a number of guest appearances on this record: The Wytches add a touch of psychedelia to ‘Nearer’, while Ed Harcourt adds his dulcet tones as backing vocals on ‘Beverly’ – an intense track that finds Laura describing the jealousy that comes when you see someone you cared about moving on with their life and in a new relationship: ‘How can I recover when I see her out with another man?’; ‘I sit here alone almost every night’.

Blood Red Shoes also dip their toes into glitchy electronica and big beats with recent single, ‘Howl’, the LCD Soundsystem-esque ‘Bangsar’ and the more emotional ‘Find My Own Romance’ (which features Clarence Clarity). ‘Anxiety’ offers a more traditional BRS sound with huge riffs and Steven examining his behaviour – and the reasons behind it – over their time apart: ‘I’m just selfishly possessed by desire’; ‘What if this is getting out of hand?’ The closing ‘Elijah’ starts off slow but gives Laura the chance to showcase her shredding skills as she seethes ‘I heard you fucked up again’ and begins to look forward.

‘Get Tragic’ is the sound of a duo freeing off the shackles and trying out all kinds of exciting new things with aplomb.