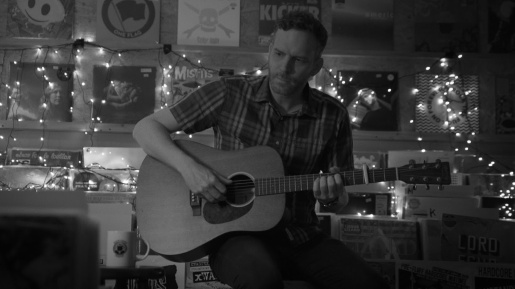 Bob Nanna (Braid, Hey Mercedes) has shared ‘Do You Want to Buy a Guitar?’ from his upcoming solo album. The new acoustic record was recorded in full on 7 September, the day that would have been his wedding anniversary.

A searingly honest song that captures a tumultous time in his personal life, it finds Bob looking back in a way that brings to mind Owen or ‘Sea Change’-era Beck: ‘Now its frets and its face are all beaten up and worn’; ‘I brought my records back to the store because I barely listen to them anymore’; ‘I used to go on tour all year, but I learned how to fear being far from here, and now nobody wants my body near so I resolve to dissolve and disappear’.

He finishes the song with a plea that sums up the dark clouds that gathered during this period: ‘Someone send help because I have never felt this unfelt’; ‘So do you want to buy a guitar? This one can only get me so far. They said playing this thing might heal my heart. But it laid in its case while I laid in the dark…’