Sad news last week as, after ten years together, Stagecoach announced they’re calling it a day. Evolving from a folky duo into a loud pop band that was equally at home with bands as diverse as Johnny Foreigner, Hold Your Horse Is and Twin Atlantic, they were perhaps the ultimate festival band. Playing the likes of Reading Festival, Truck, 2000 Trees and many more, their live show was a positive and refreshing blast of hooks and singalong choruses that never failed to raise a smile. With one last gig announced at their loyal label Alcopop’s Christmas party at the Windmill in Brixton on 21 December, it will be a real shame to see them leave, but at least they’ll go out in style. 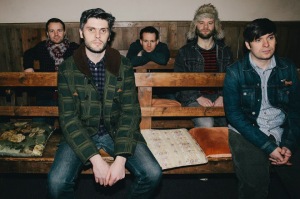 Personally I first came across Stagecoach when Moscow Flyer, the previous incarnation of Our Lost Infantry played with them the night before my birthday at Guildford’s Boileroom in July 2008, and then with a French band called Neimo a couple of months later in the same year. A show at the Good Ship in Kilburn followed, again with Moscow Flyer. Although they weren’t quite the band we’ve come to know and love, the ‘School Day’ EP hinted at their tremendous potential.

It was the following year when the five-piece really started to hit their stride, with their signing to Alcopop! Records and the subsequent release of the ‘We Got Tazers’ EP. Over this year, I saw them play again at Guildford’s Boileroom, supporting the likes of Animal Kingdom and We Were Promised Jetpacks. The EP was a joyous delight, with its instantly accessible pop-punk sound and the mandolin fully at the fore, the title track, ‘Ice Age’ and ‘Good Luck with Your 45’ especially got into your head and never left. The fact they all sound just as fresh today is testament to that fact. Even the titles alone make you recall the melodies. Finishing the year with a brief acoustic set at the bi-annual Hold Your Horse Is Christmas party at the West End Centre – and a dance to the cover of ‘Party Hard’ by Andrew W.K. – they were still going from strength to strength, even popping up on the ‘Gavin and Stacey’ Christmas special of that year.

2010 saw them release ‘Crash My Ride’, another six-track EP packed with Pavement/Lemonheads-esque future classics – ‘Headbangers Ball’ referenced MTV, Mortal Kombat and other slacker favourites, while ‘Axe Behind My Back’ was the ultimate anti-love song. They also teamed up with Johnny Foreigner for countless shows, a split EP (which included the amazing Buffy-referencing ‘Not Even Giles Would Say We’ll Be Ok’) and the strangest gig I’ve ever been to, in Wimbledon, due to a soundman who can only be described as skewwhiff… This was when the band really honed their live show, complete with clambering into the crowd and onto pub furniture, much to the chagrin of bar staff everywhere. They also played the BBC Introducing Stage at Reading and Leeds this year, attracting a huge crowd at Reading where a loyal band of followers sang along to every song. This was a real highlight in their career and has to rank as one of my favourite Coach moments.

2011 saw the band play a semi-acoustic set at the Summer Westival at the West End Centre in Aldershot, where the crowd instantly fell in love with the would-be album highlight ‘Video Shop’ and also headline the opening Fools Paradise night in Harrow, again supported by Our Lost Infantry. Stagecoach then disappeared for a while to write and record what was to become their debut – and only – album, ‘Say Hi to the Band’. Taking their time so that it was completely right, this attention to detail was rewarded when the album appeared in the early summer of this year. Eleven songs that were from the heart, with a more considered approach and managed to not only recall the peak of Britpop but also the more tender moments of Wilco and the like, it was a triumph and achievement and as it’s now their final release, it’s the perfect way to sign off. The band may be gone, but the music will live forever.

As we say bye to the band and thank Luke, Matt, Nick, John and Chop for the great gigs, music and friends made along the way, you can’t really mention Stagecoach without bringing up their riotous shows at the Great Escape in Brighton. Regulars at the Alcopop vs BSM all-dayers over the past few years, it’s going to be incredibly strange never seeing sights like this again…

In 2014, the bar staff can rest assured they won’t need to use their stage-diving deterrent of chucking slices of lime and ice cubes at band members and will certainly not have to use a mop to prod any more crowdsurfing drummers.

One thought on “Stagecoach – Say Bye to the Band”