A long-time favourite of Spectral Nights, Fatherson’s emotion-packed Scottish indie will leave an impression on even the most unlikely of music fans. Already BBC Introducing regulars and well loved north of the border, they hit the ground running when they supported on Lonely the Brave’s nationwide tour at the turn of the year. In what, on paper, could look like a little bit of a mismatch, both bands managed to wow audiences every night. Now, Fatherson finally release their debut album, ‘I am an Island’, via A Modern Way records. Will it capture the spirit of their live performance and live up to the potential of their early singles?

The title track opens proceedings and, with sparse instrumentation, the very first words you hear are ‘Know me by name now’. A forthright statement, this makes way for a more poetic tone as frontman Ross Leighton sings the lines ‘Covered in snow, not even raining’ and ‘It’s time we should go’. As the band crash into life, the song draws to its natural conclusion as Ross repeats the opening line over and over again, while the rest of the band delivers perfectly drawn ‘Woahs’. In contrast to the introduction of the song before, ‘Hometown’ opens full of riffs. A song about the regret of not growing up in your hometown, it has the earnest nature of The Xcerts (‘Take care of your brother, keep him nice and warm’), but mixes this with the dynamic force of Manchester Orchestra.

‘I Like Not Knowing’, the single from earlier this year, combines catchy hooks with deliciously dark subject matter: ‘Throw myself under a bridge, trying to get some time on my own’ and ‘I know you’re under the water. I can feel you breathing’ being just two of the stand-out lines. Despite the macabre themes, this is a song made for festivals with the sincere shout of ‘I want you to notice me’ sure to reverberate, while various band members shouting ‘oh no’ adds extra weight and intensity. One of the regular comparisons to Fatherson is Frightened Rabbit, and on ‘Cat Stevens’ (‘Father and Son’ = Fatherson – geddit?), the former even mentions keeping a loved one warm. Slowing things down, this is a hugely atmospheric addition to the record, which has massive sounding drums and a powerful crescendo. There is an element of Tellison or even Teenage Fanclub on the angst-ridden but mighty ‘Mine for Me’, a three-minute pop song that deserves to soundtrack your spring. 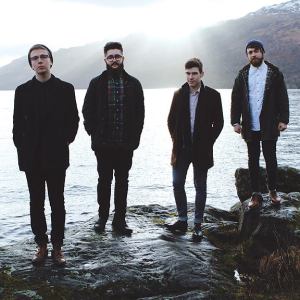 Elements of anti-folk and even Jonathan Wilson are laced throughout the short and sweet ‘Dust’. A break from the riffs and sprawling melodies, the song also contains some nods towards traditional Scottish music, as well as a commanding falsetto that discusses an old house and keeping your head straight. Swirling stadium anthemics surround ‘James’, a deeply personal song that says goodbye to a good friend and then hits you with the heart-breaking and deeply self-aware line: ‘Stop all this fighting, I’m not even worth it’. As the song reaches its emotional crescendo, this is followed by repeated calls, complete with genteel backing choral vocals, of: ‘So go home, sober up, take the weight off your feet and just chill’. The closing ‘Foreign Waters’ discusses both buidlings and people changing hue before bursting into a technicolour delight. The whole album’s been leading to a massive ending and when it comes, it does not disappoint. Guitars soar in unison as the band sing about ‘dusty train stations’ and ‘foreign waters’ keeping you apart from a significant other.

‘I Am An Island’ is an album full of passion, sing-alongs and an intensity that is hard to ignore, Fatherson are ready to set sail on an extraordinary adventure. Let’s all get on board.