Back in 2008, Hold Your Horse Is entered the local Hants/Surrey scene with a bang – and a few riffs to boot. The three members – guitarist and singer Robin Pearson, bassist James Penny and Chris Rouse on drums – had all grown up around the area and it was fitting their first gig was part of the legendary series of Run For Your Life gigs at Aldershot’s West End Centre. Following on from this, HYHI went from strength to strength with a series of brilliant EPs, potent live shows, a phenomenal album called ‘Frimley’ and a gruelling touring schedule culminating in a career highlight set at last year’s 2000 Trees and a slot at Stagecoach’s farewell gig. Let’s not forget their starring role on Aldershot railway station’s billboard either… 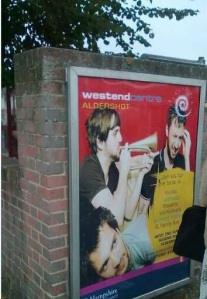 Now, after six years the trio have decided to call it a day and for their penultimate show, they returned to the hometown venue where it all started – Aldershot’s West End Centre. A venue which has been so good to them over the years, letting them play a number of great shows, bringing amazing bands like Mojo Fury and Crooked Mountain, Crooked Sea to a town they might not normally get to play. They even had the chance to put on two special Christmas shows – the first of which is widely regarded as one of the biggest highlights of the West End Centre’s recent history. Thinking back to the huge party singalong of Andrew W.K’s ‘Party Hard’ that night still brings a smile!

For their last ever show at the Westy, HYHI brought along the always brilliant Olympians and rockers Freeze the Atlantic. Full of love and appreciation for the venue, the staff and the packed-out crowd who had come to toast the band in their (almost) final hurrah, HYHI managed to create a really special atmosphere, with a huge amount of respect present (alongside the traditional heckles aimed at Chris Rouse…). With a set covering the three-piece’s entire career, the band delivered in abundance – energetic, ever so loud and full of blistering pace, ‘Frimley’ songs ‘Title Track’ and ‘Everything’s So Mundane’ still sounded as imposing and commanding as the first time you heard them, while one of their last ever songs ‘Whistlepig’ provided a fine footnote and closing chapter to the band’s journey. It was also a huge treat to hear the first song the band ever wrote, ‘Broken Sound’, as the closer to their short and sweet set, much like it was back at that first ever gig.

Hold Your Horse Is are going to be hugely missed by anyone with a love for rock music but there’s some solace in the fact they went out on their own terms – and on a superb high. Three musicians as talented as these guys are sure to bring exciting new projects, but for now let’s just look back and thank HYHI for all the great times. Take a bow lads, you deserve it.