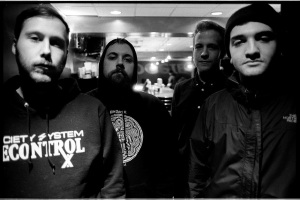 Formed in Massachusetts’ Merrimack Calley in 2010, hardcore heroes My Fictions have released a number of highly acclaimed recordings through the brilliant Topshelf Records and ‘Stranger Songs’ – their first full-length album – is set to unleash their sound to an even wider spectrum of unexpected music fans. One of the heaviest bands on the Topshelf roster, the album starts in filthy, frantic style and never lets up.

The chaos of ‘Mt. Misery’ opens proceedings with aggressive riffs that may be slow-burning for the first minute or so, but quickly the song descends into a frenzied and raw bundle of emotion, with Bryan Carifio sings, with no little anguish: ‘I just want a place I can call home’. This rawness becomes one of the key themes throughout the length of the record, even though only two of the songs clock in over the four-minute mark. The second track, ‘Postcard’, is one of the sharpest and shortest on the album. Talons-style guitar work blends with a grand cinematic aesthetic while the lively drums are very much pushed to the forefront.

There’s an element of tribal drumming in the departure lounge-setting of ‘Airport Song’ too. Melodic yet brutal at the same time, the track has a brash and apocalyptic sound that heads off in an unexpected math-rock direction, which adds extra complexity – as do the surprisingly tender and pensive lyrics: ‘I shouldn’t go back to the past’. Always heavy and unashamedly so, there’s more than meets the eye with My Fictions – very much in the vein of Frameworks and Converge, there’s real consideration and care put into the intricate structure of the songs. ‘Stubborn’, with its aggressive title, is another song of sheer brutality, speed and power, while the effects-laden beginning of ‘Parking Lot’ finds the band veering more into post-rock territory. Then there’s a scream and it turns into a vicious slice of turbo trash – although it retains the expansive atmosphere. ‘Stranger’, the final song on this breathtaking record that just doesn’t give you a chance to catch your breath, is dark and ruthless. The most anthemic piece on the album, there’s a spoken word sample that harks back to subjects explored earlier on: ‘How can you be a good poet and not care about something?’.

My Fictions don’t need to answer that, they clearly have so much passion and desire for every ounce they’ve poured into ‘Stranger Songs’. A persistent, brash record oozing with confidence, pride and an open candour that has to be admired.