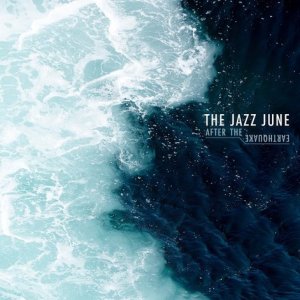 After 12 years away, The Jazz June are set to make a triumphant return with ‘After the Earthquake’, which will be released via Topshelf Records on 10 November (what a label! Their output this year has been phenomenal). Recorded by Evan Weiss of Spectral Nights favourites Into It. Over It. and mastered by his bandmate Dave Downham, the album has certainly got high credentials. Will it blow you away?

‘How come I ever can’t get through to you?’ is one of the choice lyrics on album opener ‘Over Underground’ and it’s mixed in with some Springsteen-esque echoed guitar effects. Their emo stylings are still represented by further observations: ‘If this is life, there are consequences,’ and ‘You shut me out’ sang with real heart as Andrew Low looks back at his past mistakes. When the band was first around, Braid would have been among their peers. On this first song, you can already tell the band have the same kind of maturity and knack for pop sensibilities after such a long time away as Braid did on their long-delayed LP released earlier this year.

There’s a touch of early R.E.M. meeting The Lemonheads on ‘With Honors’, a song that appears to be about knowing when you are responsible for past failures: ‘And I know it was me that fucked it up’. Amongst a mixture of metaphors about the wind knocking down the night, there is also a reveal that Andrew doesn’t have the courage to try and rectify his mistakes and there’s an oddly endearing chorus: ‘I’m sick and I’m bored and I’m angry and I’m tired but I just cannot get enough out of you’. ‘It Came Back’ shows why The Jazz June are held in such high regard by many of the leaders of the so-called ‘emo revival’ but also has the melodic elements of 60s bands like The Byrds, all complemented by a neat line in self-depreciation: ‘You thought I was perfect, but you got it wrong’.

As well as the emo sound, there’s a healthy nod to the more straight-up rock and roll of The Hold Steady and The Gaslight Anthem on many tracks, particularly ‘Stuck on Repeat’ – a song which has some real ‘hands-in-the-air’ moments as the band admit: ‘I’m still trying to figure it out’. Full of distorted and detuned pop hooks, ‘Nothing to See Here’ is another Tellison-style earworm that you won’t mind going round your head for days. It’s a song with souls laid bare on the line: ‘I still don’t know where you are’ and ‘We’ll take time’ being repeated over and over again in mesmerising style. The closing track starts off more tenderly, with simple guitar and delicate vocals combining in a tale of youthful rivalry (‘Your girlfriend told me she moved out last night’) that soon evolves into a grunge-tinged anthem that has a touch of early Foo Fighters. It then expertly naturally devolves so the album finishes with more of a flourish than a bang…
Although it’s called ‘After the Earthquake’, this is an album full of thunderous sing-alongs and hopefully it will see The Jazz June explode into a more mainstream place.