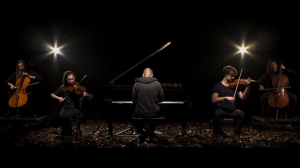 Ahead of a debut album, ex-Stagecoach drummer and nicest man in music Matt Emery has unveiled a new song called ‘L for Luna’. A real soundscape in the vein of Jon Hopkins or Olafur Arnalds, it’s been given a reworking by Turtle which only adds to the emotive feel.

Opening with gorgeous string arrangements, there’s a classical ambience about the song’s intro while electronic synths soon join the fray as it veers into post-rock territory that recalls Nordic Giants grappling with Baths. The slow build-up eventually climaxes with an array of dancey beats, swirls and incessant glitches that combine in a unique and inspiring way.

If you’ve seen the stage show of Let the Right One In and enjoyed Arnalds’ soundtrack to that incredible show, you’re on the right page for what to expect from this song – but it seems churlish to just call it a song… Matt’s taking you on a five-and-a-half-minute journey packed with feeling and grandeur. It’s an honour to join him.