While it’s always good to see bands go out with friendships and their reputation intact, final farewell shows can be a bit of a poisoned chalice. If you’ve changed styles and line-ups over the years together, what do you do? At their farewell show at the Westy in Aldershot (where else?), Our Lost Infantry tackled the challenge with aplomb. But before they did, the three hand-picked support acts made their mark on what turned out to be an emotional and incredible evening.

Annabel Allum opened the evening in some style. We’ve now seen her three or four times and every time, she just gets better- gaining more confidence on stage, shredding the guitar and conjuring up all sorts of dark and dreamy dynamics. ‘Foxes’ was probably the stand-out tonight, given more context in its introduction (just why should we get annoyed with a split bin bag if we throw away perfectly good food that could feed a starving animal?) it became more and more powerful. Annabel’s next EP has been produced by Thom Ashworth from OLI and will be split-released by his new Propriety Records and Till Deaf Do Us Party. 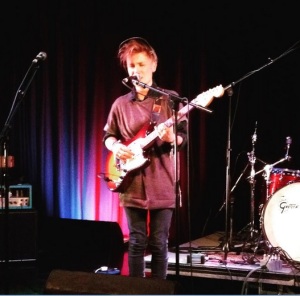 Samoans were next up and although the songs off the debut record ‘Rescue’ thrived in the venue’s surroundings, the new songs hint that they’re just going to get better. One was seething with Reuben-style anger while there was also a touch of the melodic stylings of Delta Sleep seeping in throughout the set. Much like they did before Hold Your Horse Is final show in the same place last year, Olympians came along to put the final nails in OLI’s coffin. Debuting songs from their long-awaited album alongside favourites like ‘Duvet Days’ and ‘Brunch Cannon’ – perfectly segued as Dan Harvey did have a pizza with him on stage – they showed why them and OLI became the best of band buddies over the past five years.

Andrew W.K’s ‘Party Hard’ playing over the tannoy signalled the start of Our Lost Infantry’s final stand. Opening with an emotionally fuelled ‘The Dry Salvages’, you could just tell every member of the band was going to give it all they had to ensure that the final OLI show was a cause for celebration and showed why they’re so highly regarded. A breakout of singalongs started with ‘All the Streetlights of My Hometown’ and then the first real surprise of the set – a rare airing of debut single ‘The Arsonist’. As they finished, bassist Joey Ashworth took over Parkin’s final high-pitched ‘Stop’ before being told to leave the stage by his brother, along with drummer Stu Smith, to make way for Our Lost Infantry’s ‘cast of season one’. As the original four-piece rattled through ‘Parkin’ and ‘I Love You, Sandra Billson (The Last Dance)’, it felt like stepping back in time a little but in such a good way. To see a band reform, all with smiles on their face, to play songs that had become their lifeblood was really quite rousing.

Joey came back on to provide ‘dirty backing vocals’ for OLI’s heaviest song ‘Stalemate’. Then after a few false starts, the band burst into 2011 single ‘My God, It’s Full of Stars’, dedicating it to their best friend, all-round top human being and the Westy’s head honcho, Barney. Parkin made a surprisingly sweet speech about how much being in the band had meant to him and left the stage to applause – a rarity after being mocked relentlessly by his bandmates during Olympians’ set. Our Lost Infantry 2.0 got back into gear with an impassioned run-through of favourites from ‘The New Art History’ and newly released final album ‘Interregnum’. As ‘Day after Day’ ringed out for one last time, OLI looked choked up to see the affection. It couldn’t be more deserved. 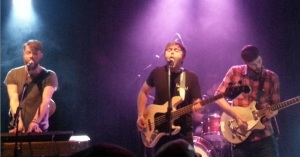 As the crowd shouted out for an encore that wasn’t coming – OLI know it’s best to leave them wanting more –tears turned to belly laughs as Joey re-entered on his own to unplug a noise that was masking the perfectly set-up PA airing of Boyz II Men’s ‘End of the Road’.