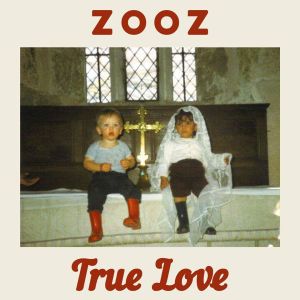 Already well on the fast-track to finding true romance with the music-adoring public, we reckon you’ll fall for the charms of Zooz and their next single ‘True Love’. Signed to our friends at the ever-impressive Super Fan 99 Records, the limited-edition 7” has already sold out but that won’t stop you from enjoying this psychedelic and sincere slice of nostalgic indie-pop.

The words ‘When we were young, true love. You were in love with him again’ are delivered in a brooding style while the music swirls around like early Suede if they’d developed an obsession with the Byrds. As the song reaches its halfway point, it zings into a more forceful beast, the vocals being delivered with extra strain and emotion.

The band was apparently born out of a failed transatlantic romance after writer Kieron spent a month in California. When he came back to the east end of London and Zooz expanded into a five-piece, the band really started to find their groove. It’s this mixture of sunshine-soaked harmony and a healthy love for classic songwriters that look set to make Zooz all-conquering.