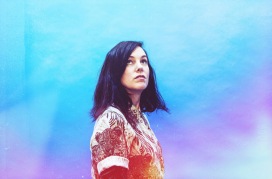 Our inbox is still full to the brim with great music. Here are five of the best songs we recently received. There’s a variety of genres, so hopefully you’ll enjoy them all as much as us.

Signed to Moshi Moshi Records, this song from electronic artist Anna Meredith combines the sinister with the sweet in spectacular fashion. With a really cool, back-to-basics video, the throbbing bass complements Anna’s delicate vocals perfectly, bringing to mind the likes of Chvrches. The video starts with what looks like basic animation but each scene has been expertly crafted to match the loops and rhythm of the song.

Currently on tour with Into It. Over It. and already a cult favourite in the resurgent emo scene, The Hotelier seem set to make the next step up with their forthcoming album, ‘Goodness’. ‘Soft Animal’ is a song that combines the best of Saves the Day with Alkaline Trio, there’s a huge amount of passion thrown into this four minutes. The words ‘make me feel alive, make me believe that I don’t have to die’ are delivered with gusto and the harmonies are hard to beat. They may sing ‘make believe that it’s alright’ and if this is an indication of things to come, 2016 is going to be more than alright for The Hotelier.

It’s been far too long since former Mansun frontman Paul Draper treated us to some more of his original music. He has collaborated and produced a number of new acts since his old band’s demise (including The Anchoress – who you really should check out), but it’s a pure delight to hear him back in the driving seat. Starting draped in industrial atmosphere and with electronic vibes, it’s not too long before you hear his distinctive vocals. As he ponders about how ‘the lack of truth becomes a dead, dead weight’ and delivers lyrics about skin crawling with spite, the song progresses from taking in a chorus his old band would be proud of to an avant-garde turn in its final throes that sounds somewhat akin to St. Vincent and Gary Numan grappling for attention. It’s awesome.

As Aloha deliver a list of hopes and dreams over intricate guitar work in the style of TTNG, ‘Don’t Wanna Win’s melodies will seep into your ears with ludicrous ease. Opening with some big bass sounds, these are joined by jangly, hypnotic and mathy guitar hooks that provides an excellent bedding for the oh-so-gentle vocals that vary in subject from ‘run from your life, talk about us like we can’t hear’ to the repeated mantra of ‘don’t wanna win but I can’t keep losing’.

Starting with a riff-laden opening that recalls Against Me! or Laura Stevenson, this three-minute punk song soon throws in handclaps and then calms things down so that the reverential lyrics have the space to make an impact. It opens with talk of staying true to your phone and then goes on to discuss the importance of conversation and then has the defining statement of ‘I wanna dance’. Falling somewhere between The Breeders and My Vitriol, Tacocat are a band you’ll keep coming back to.