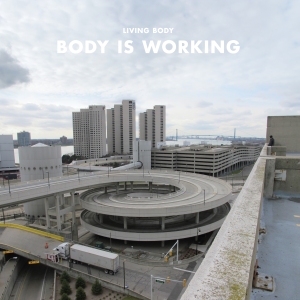 A project from Jeff T. Smith (formerly known as Juffage) Living Body’s band also comprises members of Sky Larkin and Vessels. Coming together as the result of the ‘Sonic Cauldron’ event that took place in a Leeds church, the band were encouraged to make use of the ambisonic nature of the venue. The trio tried out new songs and have now honed them into what you will hear on debut album ‘Body is Working’.

‘Declaration of Independence’ kicks off the album and it has a reverb-drenched opening that soon makes way for something that sounds akin to the great lost Leeds band, Grammatics. There’s talk of smoking cigarettes, lying around in the dark and people ‘lurking with suspicion’. The band sing ‘Rest assured, I won’t vote for you’ over soundscapes and experimental percussion. Clocking in at seven and a half minutes, the song packs so much in and indicates that the band are equally adept whether they’re dipping into math rock, post-rock soundscapes or even drone. This is followed by ‘Choose’, a chamber pop song that appears to be inspired by Los Campesinos!’ more anthemic moments. It features Belle & Sebastian-style vocals that ask ‘Why don’t you get out while you can?’ and explains to the song’s subject ‘You’re always choosing your own fights’. Throughout the record, and on this album especially, there’s a feeling of trying to find hope and optimism in a world that is currently laced in negativity.

‘Slowburner’ is just over a minute of incidental noise that works as a bridge between ‘Chase’ and the angular pop of ‘I Recollect’. Katie Harkin takes over vocals on this song and there’s an avant-garde feel to all the instrumentation. A song about lost aspirations, Katie asks ‘Isn’t it good to see both sides? Although it can be hard’; ‘walking up an endless flight of stairs that leads to nowhere’; and asks people to ‘speculate what has become of our surroundings’. It is after this song that the record takes a more experimental approach: ‘Trail’ is a cinematic piece full of loops and ‘Heirloom’ is an intricately pieced together piece of Grandaddy-style tenderness. ‘Last Few True’ is more accessible and immediate but no less dreamy. With a guitar hook that floats around in genteel fashion, the vocals state ‘I see you, thinking you’re the last truth’ and how ‘when you’ve heard it all before, then a joy becomes a bore, because you know there’s so much more’. Poignant and affecting, there’s tentative positivity in the sound – especially in the final, louder two minutes.

Conveniently titled, ‘Closer’ finishes the album with in-your-face riffs that recall the best slackerpop bands from the US. Very direct with lyrics like ‘Don’t wait before it comes, it might be too late’, it makes a defining statement of how everyone should speak their truth (‘I know it’s so hard to say what you mean’) in an effort to live in an altogether better world. Living Body’s ‘Body is Working’ is a record that has so much going for it – it’s a melting pot of styles, genres and messages that leaves a huge impact on you. You’ll return to it again and again.