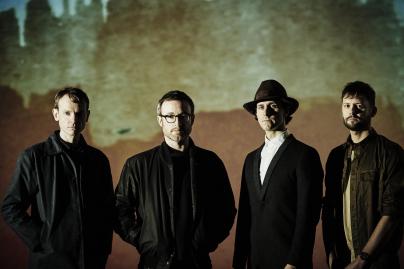 Indie stalwarts Maximo Park are making a welcome return this year and ‘Get High (No, I Don’t)’ is the first single to be unveiled from new album ‘Risk to Exist’. It starts off being driven along by a pounding rhythm and synth section as Paul Smith asks what you’d do if ‘someone told you it was right’. There’s an arty Dutch Uncles feel to it although the chorus – complete with an answer to a rhetorical question – couldn’t be delivered by anyone but the immeasurable Paul Smith. The final 30 seconds see instruments being smashed in quite some style.

We were reading an interview with Ric from Tall Ships recently where he was claiming the new album, ‘Impressions’, was heavily influenced by a tour with The National – and you can definitely hear this on the gently anthemic ‘Home’. It’s nostalgic and pining as the band speak about having ‘years and years of longing’, heartbreak and how  ‘We all know nostalgia is toxic and dangerous. That it poisons the heart, smothers and enslaves us’.

Released to coincide with Piano Day 2017, Matt Emery has composed this beautiful piece of avant-garde classical music. As well as Matt’s gorgeous piano there are bursts of cello, viola and violin, which all come to the forefront around three minutes in. This is when the song threatens to take a Talons-esque turn before settling into a more restrained but no-less grand Olafur Arnalds style.

Following a UK tour and triumphant appearance at ArcTanGent last year, Chicago’s finest masked math-rockers are set to release a new eight-track EP called ‘Tactical Chunder’ (they clearly learned some defiantly British terms on their jaunt over here) and you can pre-order it in ‘toxic yellow’ or ‘snot green’ from their Bandcamp today. ‘NSFW (Nick Sintos for Work)’ is the first song to be aired from it and it’s got a huge sound for just two people. It sounds to us like Axes grappling with Vessels, but with psychedelic drool slobbered all over it. It’s awesome.