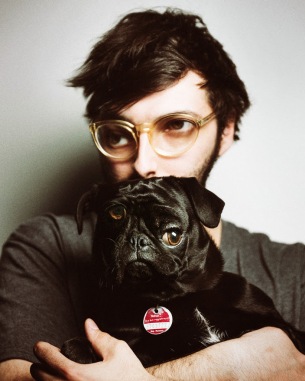 Conor Murphy from emo heroes Foxing has announced a new project and it’s far more upbeat than his day job. With an album coming out on Triple Crown and dates with Tigers Jaw in the pipeline, ‘Fuck This’ is a jaunty slice of indie rock and roll, complete with irresistible pop hooks and a surprising falsetto. As he sings about how ‘We’ve let the future become a sacred drug’, he repeats the title over and over again in a brash and upbeat fashion. It’s the sound of a man just having fun and making music that can’t fail to make you smile.

Katie Harkin (formerly of Sky Larkin and touring member of Sleater-Kinney) has unveiled her Harkin project’s cover of Cosmat Angels’ ‘Independence Day’. Recorded while attending the the LA Women’s March and inspired by the absurdity of Brexit, it features members of Wild Beasts, Wye Oak and Warpaint and is a fantastic blend of indie-pop hooks, Katie’s strong Yorkshire accent and a message that anyone with a conscience will resonate with: ‘I can’t relax cause I haven’t done a thing. And I can’t do a thing cause I can’t relax.’

Alpha Male Tea Party have long been a favourite of the math-rock community and now they’ve found the perfect blend by joining the Big Scary Monsters family. Their next album ‘Health’ will be coming in the summer and looking at their tour dates, they’re sure to be appearing in a town or festival near you. ‘Nobody Had the Heart to Tell Him He Was On Fire’ is the first cut from the album and its three minutes and 20 seconds of fun riffs, odd time signatures and a rhythmic trance that you can’t help but dance (well, shuffle around…) awkwardly to.

Ahead of their second album, ‘Soft Spots’ (released via the ever-reliable Tiny Engines), Adult Mom have unveiled ‘Tenderness’. With a title like this, you’d imagine it’s a song you’d like to wrap yourselves in – and you couldn’t be more right. It’s wonderfully short and sweet as folk meets emo in a Rilo Kiley style and the line about how Steph Knipe feels ‘softness everywhere’ is delivered in a goosebump-inducing style. Adult Mom already have tours booked with Kevin Devine and Free Cake for Every Feature and we’re sure they’re won’t be a dry eye in the house at any of these shows.

‘Afterthought.’ (and please note that definitive full stop) is the first song from Luke Prosser’s (who you may know from itoldyouiwouldeatyou) new project and it’s atmospheric, slow-burning and has a spiteful attitude running throughout as he looks back at a past love that, in hindsight, wasn’t all it was cracked up to (‘Am I just another notch on your frail heart?’; ‘Were you ever listening? Did you even care that I was stood by your side? You seemed so preoccupied’). It’s a sad song with a very sparse atmosphere that fits in with Elliott Smith, Peter Silberman or Nick Drake and there’s a delicate fragility even when Like talks about moving on: ‘I’m afraid that I loved you, but I’m so glad I fought to be an afterthought, just a stain on your memory’.