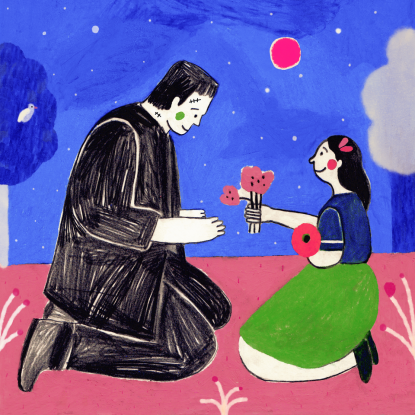 Signed to our friends at Audio Antihero, it’s with a heavy heart we review the final album from CHUCK (known to friends and family as Charles Griffin Gibson). The fantastically named ‘Frankenstein Songs for the Grocery Store’ is an album full of songs ‘about diet, exercise, work, love, TV and animals’. It’s CHUCK’s last album due to general real life stuff, but he plan to leave the music world with a bang.

The opening ‘Stoner’ hints at a more electronic and cinematic sound than we’ve previously heard from the Brooklyn (via Massachusetts) native. Its synths gradually build up and it sounds like the result of an unholy union between Gold Panda and Passion Pit. This is followed by the recent single ‘New Yorker’. Starting with drumbeats and handclaps, it’s a playful love letter to the city that never sleeps with CHUCK singing: ‘Now I’m a New Yorker, get the hell out of my way’ and finishing with a proud boast of how he ‘ain’t gonna die’. Before all this, CHUCK looks over his life growing up while Phoenix-style hooks swiel all around him; he explains how he moved to the East Village after graduating college and fondly recalls buying Billy Joel’s Greatest Hits.

In stark contrast to the bombast of ‘New Yorker is ‘Becky’; a very personal song with gentle keyboards. It finds CHUCK delivering a pep talk to someone who is stuck in a rut: ‘After 9-5, you’re barely alive. Always inside, always behind. Dreaming of a place where you can erase every trace of mankind’. Part of his advice is one many can get behind, too: ‘You just need caffeine’. ‘Cherry Tree’ has the most straightforward guitar sound on the record as CHUCK looks at his own life and exclaims how he can’t help himself from getting into certain situations. With 15 songs on the album, there are a couple of interludes – one of which is a radio segue called ‘Bulldog’. Is that a cheeky Frasier reference?

‘Caroline’ is another personal, acoustic song with nods towards the sheer beauty of Avi Buffalo. There’s a sweetness in CHUCK’s vocal as he fondly remembers how the Caroline in question ‘finds it hard to be on time but everything just turns out fine’. It finishes with a charming burst of glockenspiel. The Conor Oberst-style country rock of ‘Kiss (for Janne)’ is immediately after this and has a lot in common with Daniel Johnston as CHUCK talks about losing faith in humankind, bodies falling behind, his words being poorly timed and the way he is ‘feeling empty deep inside’.

As the album veers towards its climax, the penultimate ‘Happy Birthday’ will bring a tear to your eye. It’s an atmospheric piece with mathy piano that finds CHUCK plotting to win a former lover back on her birthday, no matter what it takes: ‘I want to cut the cake and hit the lake later this year or punch the gas and piss on the grass and crack another beer’. Clocking in at over five minutes, there’s an Antlers-esque falsetto as CHUCK pleads: ‘Happy birthday babe, is everything OK? Do you want some champagne? What do you want me to say? I just came to say happy birthday’. This precedes the closing ‘Teenage TV’ (the last song you’ll hear by CHUCK), which is a wistful and nostalgic piece of introspection. This is an album that gleefully skips across genres and shows just how much CHUCK will be missed in the future.