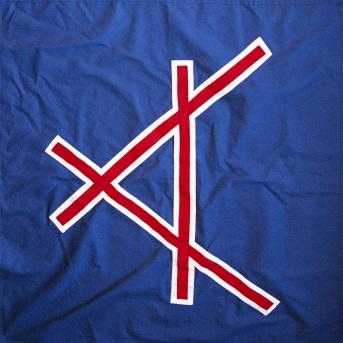 Following ‘Foreword’, their well-received ‘pre-album’ of already-released EPs, Cassels now unveil their debut album proper, ‘Epithet’, which is available from  Big Scary Monsters. Jim and Loz Beck have played numerous festivals since ‘Foreword’ and have toured around the country with awesome bands including Meat Wave and itoldyouiwouldeatyou. Their sound has also evolved and on ‘Epithet’, they rally against the current state of our un-United Kingdom.

It opens with the couplet of singles that were released back in the summer and ‘Coup’ is one that really does showcase Cassels’ ability to rant with the best while also delivering killer riffs. It starts with slow and surprisingly gentle drums by Loz before Jim’s guitar comes in in a Johnny Foreigner-meets-Meat Wave style. Stop-start and intricately put together, Jim then starts with his spoken-word singing but stating how: ‘we form an army of waifs and strays, caught somewhere between the minimum and living wage’. There is then talk of apathy as Jim explains how instead of immersing himself in the important social issues, he’d rather look at things more trivial: ‘To be honest, I’d rather play Call of Duty or something’; ‘Turn off the news and illegally stream the latest blockbuster hit. Can’t miss this sick television series’.

He also goes on to ponder whether he should have paid more attention history as everything is repeating itself and then states how we seem to be entering a new form of Huxleyan nightmare. ‘Let’ contains a sample of a man talking about how the past 10 months have been full of terrible events (sound familiar?) and this soon makes way for Jim’s post-Brexit anger at just how divisive that damn referendum made our country: ‘Replace the red and blue with a bulldog fucking a lion’; ‘I feel I’m beset on all sides by old bigots who take pride in peddling old, racist lies then there are those too poor to afford rent; unable to climb a mounting mountain of debt’. It finishes with what could be a defining statement right now: ‘Britain, home of the ignorant’.

‘War’ is under three minutes long but has a burly guitar sound as Jim laments the concepts of war and divorce. He talks about how ‘the children all blame themselves’ before then shouting with some gusto that ‘kids only fuck things up’. It’s a tale of broken promises and it’s followed by a bitter tribute to the siblings’ home town of Chipping Norton in ‘Where Baseball was Invented’ (yes, that most American of sports does have its origins in a small town in Oxfordshire). Jim unleashes his wrath on the ‘tweed-clad souls’, ‘top-of-the-line Range Rovers with personalised number plates’ and ‘white-faced racists’ who he shares the town with and even the local bar doesn’t escape his fury: ‘Then it’s on to B and T; that stands for Bitter and Twister. I don’t think a better example of irony has ever existed’. It finishes with a biting line about the locals who enjoy killing for fun and how the sound of a hunting horn is ‘proof once and for all that slaughter is the most miraculous cure for chronic erectile dysfunction’.

There are more heartfelt moments on both the art rock of ‘You Turn on Utopia’ (‘They’ve grown up too quickly. Let’s blame it on Nestle and Disney’) and the heart-rending ‘Sepia Good Times’. This is a song all about someone whose body and mind is starting to fail them. The first half features distorted vocals as Jim sings about how ‘without fail there is silence; she searches for memories’. He then goes on to ponder how ‘her face occasionally flexes into shapes so well-practised’ before delivering another powerful metaphor about how these glimpses of a former life are like the ‘well-oiled pistons of a driverless train’. Jim finishes this song with pained screams of ‘it’s never quite the same’. There’s a fine contrast with the next song, the Crass-like 58 seconds of ‘This Song Has a’ which finishes with a lament of ‘Don’t be so miserable all the time. Cut it out. Lighten up. Simple. As. That.’

As the record reaches its final throes, there is even more self-depreciation on show – ‘Motor Skills’ opens with the lines ‘My incapabilities frustrate me: I don’t know how to think, at least not really properly. Fucking send me to a shrink’ and repeats of ‘give up’ while the closing ‘Chewed-Up Cheeks’ has an Art Brut feel as Jim first talks about how it’s one of those days and then how, despite the fact he’s ‘usually suspicious of the pithy and crass, the cheesy and officious’, he finds solace and happiness in songs. Both members then sing about how ‘this song is for you’ with real tenderness before a sample marks an upturn in tempo.

‘Epithet’ is an album that tackles the issues of today and gives a voice to those who are horrified by where we currently are – and where we could be heading. It’s full of clever and witty wordplay, huge slabs of guitar and wildly frenzied drums. It’s brilliant.