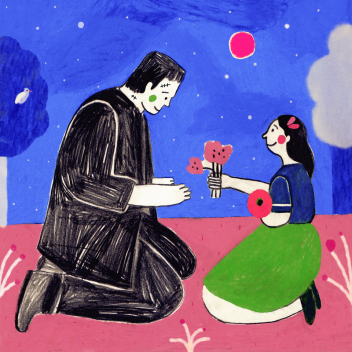 Audio Antihero Records signing CHUCK was kind enough to let us know the Top 5 songs that influenced this year’s ‘Frankenstein Songs for the Grocery Store’ and the Top 5 songs he’s enjoying right now. It’s an eclectic mix so enjoy!

5 Songs That Influenced My Last Record

I LOVE the lyrics in this song. It’s got witty pop culture references. It’s sexy. It’s also kinda spooky in its own way. Perfect for a late night drive through the desert. Also good on earbuds while you’re pounding the Lower East Side pavement. I thought about Jonathan Richman a lot when I wrote “New Yorker”.

I tried copying the vibe / acoustics of this track on “Cherry Tree”. Peaer write songs with really unique melodies and rhythms. I’m a big fan. Gotta catch a show one of these days.

This song means so much to me. AJJ’s work puts me in this sweaty suburban mindset. It makes me think about eating gas station hot dogs and smoking Top tobacco hand rolled cigarettes. Why do I like thinking about such gross things? I don’t know. Maybe it’s part of being an American. I thought about AJJ a lot when recording “Bodies”.

When I found this song I listened to it on repeat for weeks. One of my favorite parts of it is the back and forth with the vocals. I like singer-songwriters singing to themselves in different voices on their songs. I do that a lot, sometimes out of necessity, sometimes for fun. “Meow” is an example off my last record of me seeing how high I can push my voice. Meow!

For me, this is THE song of the post 2000’s DIY music generation. It’s mega influential. Listening to it now – it reminds me of Frank Ocean’s Blonde. I would argue Alex’s inclusion on the production of that record confirms that artists as massive as Frank are influenced by tracks like “Icehead”. I don’t connect to the lyrics in any conscious way, but the vibe of it knocks me on my ass every time. The softness. The melancholy energy. I don’t know man. I thought about “Icehead” a lot while recording “Oceans”.

I found this record in the Italian section of A1 Records in Manhattan. I listened to it at the store and once I heard this song I knew I had to buy the album. The bass line is very Wild Nothing. I’m trying to listen to more music that isn’t in English.

Another DIY legend, Mat Cothran, just released this record. His past few have been really stellar. I love some of the sounds he’s able to capture, and his songwriting is strong. Much respect to you MC.

I know nothing about this band. My friend, DJ Andrew Devlon, played this in a mix he made. It reminds me of high school. I used to listen to a lot of tracks like this while cruising around with my friend Sean. It reminds me of mumblecore cinema as well. Also sounds like a really low-key TOPS song. Makes me wanna dance. Shout out to Electrelane!

Jean-Luc Ponty, from my Wikipedia research, was a violinist from France. I found this particular album at Academy Records in Greenpoint in Brooklyn. When I put this on, I imagine I’m an aging French detective trailing someone through the rain – from neon soaked bar to neon soaked bar. Also, in an alternate universe, this coulda soundtracked the Cantina bar in Star Wars.

I heard this song in the amazing film – “We Need To Talk About Kevin”. Is it a man singing? Is it a woman? What instrument is being played? When was this song recorded? I haven’t done any research into it. All I know is, it’s an unbelievably gorgeous recording that seems too heavenly to be true. Well, now from the name I can deduce it’s a man, but I didn’t know that when I first heard it.