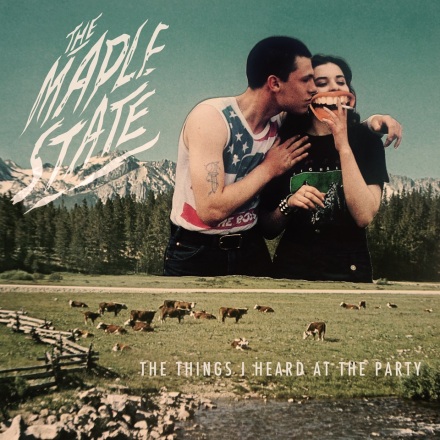 Manchester band The Maple State release their first new material in almost a decade with new album ‘The Things I Heard at the Party’ (via Far Out Records). In the band’s hiatus, the members have found themselves spread across the globe and worked in industries ranging from universities to wildlife conservation and environmental projects. But how have these experiences informed their sound?

Opening with the title track, the band are in fine form from the very first note. This combines crunchy guitar with Christian Counsell’s thunderous bass as Greg Counsell talks about hitting it off with someone even though there’s something missing. Inspired by the immediacy of punk rock and containing snippets of conversations that Greg had overheard at a Halloween party full of super-rich people, there’s a cheekiness in his voice as he recalls someone saying: ‘If you weren’t so shy, we would be doing this naked’. Following on from this is ‘Something in the Water’; Greg’s account of an unintentional and accidental trip following an ayahuasca-fuelled afternoon at a village football tournament in Bolivia. He talks about a girl crawling up the walls and ‘sending shivers up and down my spine’ before recalling – with a mixture of fondness and disgust – how: ‘there was something in the water that had us losing our mind’.

This stream of consciousness and rolling narrative continues on both ‘Cannonball’ and ‘Africa’ ; the latter of which is an account of someone close falling ill in an unfamiliar country. It has a thumping bass and sense of self-depreciation as Greg talks about how: ‘You wait and I call, seems there’s no one useful here at all’ before then changing his mind and stating ‘you wait and I call, seems there’s someone useful after all’. Richard Higginbottom’s intense drums signal the start of the eminently danceable ‘Winner’. Recalling the early indie-pop of The Maccabees, it has a sing-along element with the opening words: ‘You said you want it and you need it now and there’s gonna be a winner’. This upbeat element is then brought back down to Earth as Greg recalls missing signs through ‘wine, coke and ignorant bliss’.

The seductive and sultry ‘Sexy Jam’ does what it says on the tin with Pulp-style candour, while ‘Deadline’s spoken-word vocals and guitar hooks also evoke memories of Britpop – but mixed up with more contemporary alternative and emo influences. Greg talks about hope and realism in today’s world (one which ‘is geared up to torment you’) and frets about how we always seem to be working towards a deadline. From ‘twisted news stories’ to ex-girlfriends, he lists the things that can get you down and then uses one of his travel experiences to offer a further insight into how his mind works: ‘I’m sat in Sunset Boulevard and taking It all in and I know this time tomorrow I’ll be back in Manchester where the insignificance of every repetitious task will cloud my view and make me question if I ever really left’ – for us, it captures the post-holiday blues perfectly.

The closing ‘The Motorbike and the Closest of Calls’ is packed with handclaps and stop-start guitars and has a wistfulness as Greg admits ‘We are not the bright young things that we were yesterday’ and ‘All my friends are having babies and I’m the one that’s left alone’. It’s a touching account of growing older (‘All we have is time’) and sums up the ethos of this record – life can take you to unexpected places and people will head off in different directions but there’s always time for some melodic indie-pop hooks.