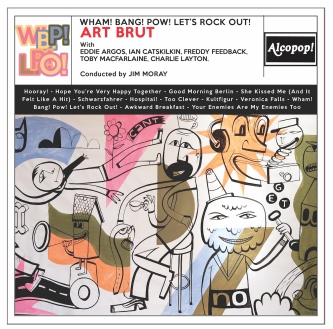 Now signed to Alcopop! Records, Art Brut are set to release their first album in seven (!) years. During that time, there have been a number of changes in frontman Eddie Argos’ life; not least a major break-up, a move to Berlin and a hospital visit for a major operation – which you will have heard all about on the recent single, appropriately called ‘Hospital’.

Within seconds of the opening Carter USM-style anthemic riffs of ‘Hooray’ it feels like Art Brut have never been away. It’s two minutes long and has Eddie reassuring you that ‘everything’s gonna be alright’ while also dropping in a few classic album references: ‘I’m not bitter and I don’t want her back. There’ll be no ‘Rumours’ or ‘Blood on the Tracks”. There’s real joy in Eddie’s voice as he shouts the title of the song like a child awaiting pudding and there’s more passion as he shouts: ‘Hey misadventure, I don’t resent ya’. The second song is a very Art Brut-style break-up song. Eddie laments the end of a relationship over catchy hooks: ‘A record collection split in two and you took all the bad songs away with you. Hopefully this will be the last break-up song that I need’. Of course, being Eddie, there’s a wicked wit when it comes to moving on: ‘I hope you’re very happy together. And if you’re not, that’s even better’

‘Good Morning Berlin’ is a Jeffrey Lewis-style take on his new surroundings (‘hipsters with beards eating falafel’) that gives Eddie the chance to practise his German while harking back to the band’s debut with a statement about travelling: ‘Everything is gonna be just fine’. Art Brut then flip the disgusting nature of the Gerry Goffin and Carole King-penned ‘He Hit Me (and It Felt Like a Kiss)’ on its head with the celebratory ‘She Kissed Me (and It Felt Like a Hit)’. This song is Eddie’s celebration of the early stages of a relationship when you’re ‘under the covers being rude, only coming out for takeaway food’. He then goes on to offer ‘Emily Kane’-style observations on finding a new way home (‘I no longer have to do it alone’) before revealing how his mind works in the midst of intimacy: ‘Keep going. Don’t stop. I feel like I’m on Top of the Pops’.

This classic Art Brut sound continues throughout the record with ‘Hospital’ featuring wry back-and-forth conversations between Eddie and his bandmates: ‘I’m gonna drink plenty of water and eat my greens (he’s gonna join the straight-edge scene!)’ and ‘Too Clever’ and ‘Kultfigur’ oozing with snarling punk riffs. The latter is a reflection of what it means to be Art Brut in the current musical climate: ‘Cult figure, don’t snigger… It’s not about making the audience bigger’; ‘We’ve got a lead singer… Doesn’t really sing. Lives off his painting. Got a flat in Berlin’.

The wistful ‘Veronica Falls’ is full of sadness and regret as Eddie talks about how ‘I wish I’d been a little bit bolder’ and ‘You’re my big mistake, the chance I didn’t take’ amidst references to Del Amitri, while ‘Awkward Breakfast’ is an angst-ridden and cringeworthy tale of the morning after a one-night stand: ‘A slice of toast with my head in my hands’; ‘I don’t need this heartache. I just want some Corn Flakes. Last night you were being rude with me. Now we’re eating bowls of Muesli’. The final track, ‘Your Enemies are My Enemies Too’ has nods to both classic rock and bands like The Fall as Eddie vows to stand alongside a loved one: ‘Your enemies are my enemies too. If somebody crosses you, wel, now they’ve made me cross too’.

The over-riding message of ‘Now we’re a team, we’re going to be unbeatable’ is one that could apply to Art Brut, Alcopop and all of us who love the band. It’s a treat to have them back. Wham! Bang! Pow! Let’s rock out! indeed.