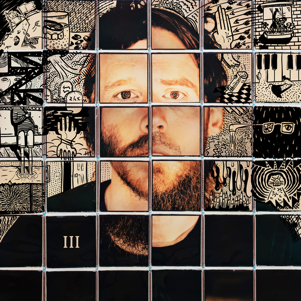 Following a surprise show at SXSW and now that their busy schedules have finally aligned, Kevin Devine and Manchester Orchestra’s Andy Hull have revealed details of their upcoming album ‘III’ and shared two new singles to what your anticipation. Also featuring MO man Robert McDowell, the album will be available digitally from 14 June and physically via Loma Vista Recordings on 21 June – pre-order HERE.

Sparse and folky acoustic strums open Andy’s deeply personal piece as he sings about love in candid yet abstract terms: ‘All the lake houses were moving, they were spinning around in the lake. They were shark-infested waters, they were dangerous places to play’. Soon, the song veers into something more sonic as the shark makes his attack and you hear different elements of the band from different places. It’s something akin to Brian Eno producing boygenius or Peter Silberman.

Bad Books aimed to ‘achieve a certain level of floating and immersive movements to take the listener along with the lyrical journey’ in the soundscape and certainly achieved this. As Andy tenderly sings: ‘Just because we have a baby, doesn’t mean that you move on to me’, there are powerfully layered backing vocals. He then goes on to reiterate his love for the subject: ‘If I ever lose you, if that horrible day ever comes, I don’t know how I’d recover’ I know that I love you, the day that we swore on that ring’

‘I Love You, I’m Sorry, Please Help Me, Thank You’ (written by Kevin Devine)

Written following the birth of Kevin’s daughter, this song finds him trying to make sense of the incredible combination of emotions a new parent experiences. He’d heard the title offered as a prayer in a secular setting and says ‘it offers me a bit of perspective and calm when things feel overwhelming’. Kevin asks for ‘some bumper sticker wisdom’ amidst a sound that captures the intensity of his solo albums but also manages to have a country tinge with restrained and refined guitar work. The powerful lyrics also nod to the Boss: ‘You were a student, you were a soldier, you were a symbol, they made you a martyr’. ‘

Kevin then candidly talks about how his daughter has changed the way he feels about these trouble times: ‘When I open my perspective from my fear of the world, for the daughter I was trying to raise, with the total sum of everything asleep in my lap, I could hear I was the one in my way’. At around the two-and-a-half-minute mark, the song veers into a more glitchy, electronic-tinged sound that reminds us of Villagers’ newer material. It also has Kevin’s heartfelt words that can’t fail to make you smile as he again talks about what being a new parent means: ‘It changed me, shaped and remade me, oh, what it gave me’; ‘Life is sweet’.