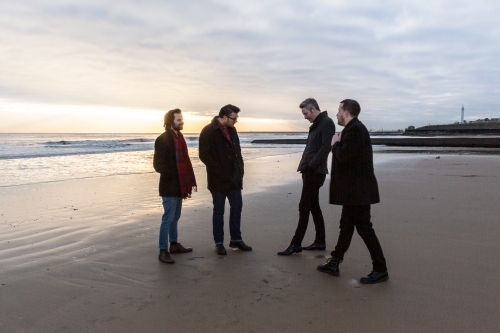 The Futureheads have returned with their first new album since 2012’s a capella effort, ‘Rant’. The band was put on hiatus after frontman Barry Hyde checked in to a psychiatric hospital to help him deal with mental health issues – many of which are referenced across the 12 songs that make up ‘Powers’. Recorded and self-produced at Newcastle’s First Avenue Studio, the four-piece say this album looks ‘at the balance of power in a personal, political and relational sense’.

The spiky and angular post punk of recent single ‘Jekyll’ opens the album in style with killer riffs, a huge bass line and observations on how it felt to be horrified by ensuing violence while at school: ‘Do you enjoy a spot of mindless violence?’; ‘It left a scar and I can’t go back but if I could, I’d close my eyes, let it fade to black’. ‘Good Night Out’ follows with a celebration of summer where ‘even the old boys’ are invited, while ‘Animus’ finds Barry offering an insight into his anxiety with an increasingly assertive (and aggressive) tone: ‘Tell me ‘Can you get this done?”; ‘Is your life a struggle? Did something burst your bubble?’; ‘Life in a bubble, it’s nice in the bubble’. ‘Across the Border’ deals with the way the privileged few treat the many and touches upon everyone’s favourite nonsense subject of Brexit (quite what The Futureheads will make of Boris and his dealings is anyone’s guess) amidst a sound akin to ‘Popscene’-era Blur: ‘Take, take, take, take, take, take. What will it take to change your mind?’; ‘Tomorrow we’ll run faster across the border’.

The new wave sound of ‘Electric Shock’ has call-and-response vocals and another insight into Barry’s unsettled state of mind: ‘When I got my electric shock, it knocked me off my feet. When I got my electric shock, it tasted bittersweet’; ‘I couldn’t stop screaming and I thought that I was dead’. ‘Listen, Little Man!’ is another recent single about being made to feel small by those in power: ‘When did we all shrink so small? Why do we all think so small?’; ‘How long has it been since we stood tall?’; ‘When was it all taken away? Why don’t we try to take it back?’ and ‘Head Case’ has killer Buzzcocks-style hooks and group vocals acting as the voices inside a head ‘when you’re living like a head case’.

‘Idle Hands’ has dark and conversational lyrics about mortality and the powers above: ‘Give him his due, don’t speak ill of the dead or he will appear where angels fear to tread’; ‘The devil may care but I don’t. Our idle hands can’t hold on anyway’. ‘0704’ provides a powerful account of a partner going into labour: ‘At the stroke of midnight, your eyes told me your waters had broken. Then the world around us disappeared, suspended in time frozen. You sat open, I fell into the ocean’. Barry then praises the mother with poignant passion: ‘You made it seem so undemanding. Your strength, your grace is beyond my understanding’. The closing ‘Mortals’ is a rhythmic and frantic song with a fever dream feel (‘What I learnt, it got under my skin’) and repeats of ‘Apparently it’s all a dream and when we die, it starts again – mortals, mortals, mortals’.