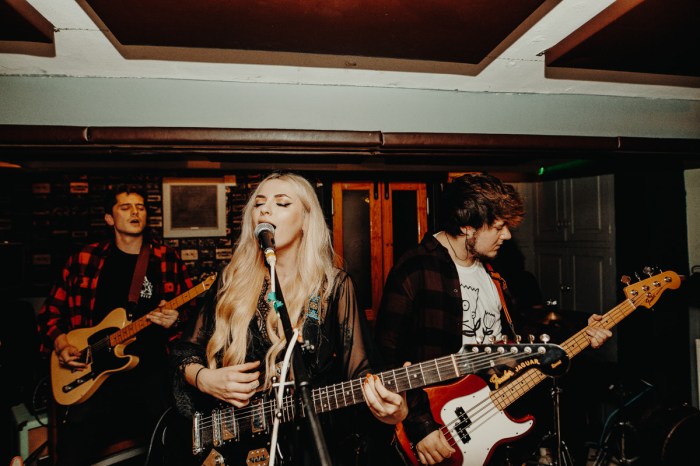 Oxford dark pop four-piece PETSEMATARY are the latest band to sign to Beth Shalom Records and have announced details of ‘Get Away With It’ (out on 29 May and available to pre-save on Bandcamp and Spotify now).

Already featured in the April issue of Flying Vinyl, it’s the first in a series of singles PETSEMATARY will release this year. We had the chance to speak to the band (Gaby-Elise Monaghan, Luke Allmond, Jack Kendrew, Casper Miles) about how the signing came about and how they’re dealing with the current situation.

Tell us a bit about the band and where you’re from/how you formed.

Gaby: Casper (drums) and I are both from London, but I met Jack and Luke (guitar and bass) through the local music scene when I moved to Oxford for uni. Petsem started as a venting project for me which is how my solo EP Volume I came about. I asked Luke to record and produce it for me which we did over 2 days at a studio in Oxford, and while the songs are pretty embarrassing to me now it was super cool seeing that people actually liked it and found it relatable. I’d seen Luke and Jack play in different bands, and I’ve been playing bands with Cas since I was 17/18. They’re some of the best musicians, songwriters and pals I have so it made sense to bring them on board for Petsem.

How did the signing to Beth Shalom Records come about?

Luke is a promoter in Oxford and pitched us to Joe (Beth Shalom Records) to support another great BSR band itoldyouiwouldeatyou for a show in September. itoldyouiwouldeatyou are one of our favourite bands, so we were pretty chuffed when Joe reached out to us after hearing a couple of our recordings and said he was interested in signing us. With all of the stuff it’s been pretty uncertain and worrying especially as a baby band who are just starting out, so we’re really lucky and excited.

What can we expect from PETSEMATARY over the next few months?

Probably not shows, but regardless still loads more content. Songs, songs, songs. We also have an isolation music video in the works, merch ideas, livestreams, all of the limited but great things we can offer during this weird time. Keep ya eyes peeled :)))

How would you describe your sound to someone who’d never heard you?

Dark indie pop with grungy overtones and a whole load of oversharing (ft. lots of reverb).

Gaby: Rock Against Violence at Oslo Hackney with Girli and our pals Average Sex was an amazing show. We all partied loads after so it was just a super fun night and all to raise money for victims of domestic abuse. Ritual Union 2019 in Oxford was also a highlight. Getting to play alongside bands like The Comet Is Coming, Self Esteem, Bo Ningen, as well as having a bunch of our pals there was super cool.

Casper: My favourite gig so far was also probably Ritual Union. It was great to play to lots of new people and be on such an incredible lineup, always a pleasure being a part of something like that.

Who are your favourite bands and what are your biggest influences (can be outside music)?

Casper: I think for me personally my biggest influence is seeing people that I’m close to make music, whatever that may be. We’re lucky enough to be friends with so many amazing musicians and bands, and it’s always inspiring to go and see them play or hear their new recordings for the first time.

Gaby: Songwriters like Jeff Buckley and Elliott Smith, also bands like Deerhunter, Slowdive and heavier stuff like Alice in Chains and Alcest. I’ve also really gotten into Type O Negative lately. Peter Steele (RIP) was just like this incredibly sexy vampire man – he is sorta like a cartoon, but also the songs are really fucking great and heavy and shoegazey??? Picture an absolutely stacked 6ft 8” goth man singing “I’ll do anything to make you c*m” in a low metal voice alongside dark riffs and synths. Bizarre. Incredible. I’m obsessed.

Luke: I just love emo music really. Anything super earnest and with noodley guitars. Los Campesinos! are my favourite band of all time. Strange Ranger are one of my new favourite bands, their most recent album Remember The Rockets is unbelievably beautiful.

How are you finding lockdown? What would be your top tips for staying safe?

Gaby: I’ve found it pretty difficult being away from family and friends, but also I just really miss the pub to be honest. Wash your hands, try and keep your mind and body healthy, Facetime your friends, don’t beat yourself up for not being productive during this weird ass time.

Jack: Scary and uncertain but there’s a feel of everyone digging in and trying to make a positive out of shitty situation. Being creative where and when we can feels more important at the moment than it used to be. My tips would be to wear a mask and wash your fucking hands!

Gaby: I just bought a Switch and have spent hours repaying my eternal debt to Tom Nook. I’m also reading Circe by Madeline Miller which is about a witch from ancient Greek mythology. I’m pretty obsessed with ancient history and stuff, and it’s really cool that its written from a female perspective. Aside from that, I’ve been binging a lot of terrible horror. Huge recommendations are the MTV Scream series and also Wrong Turn 2 because it is simultaneously disgusting and hilarious and Henry Rollins is in it.

Name five bands that would be on your ideal festival line-up: