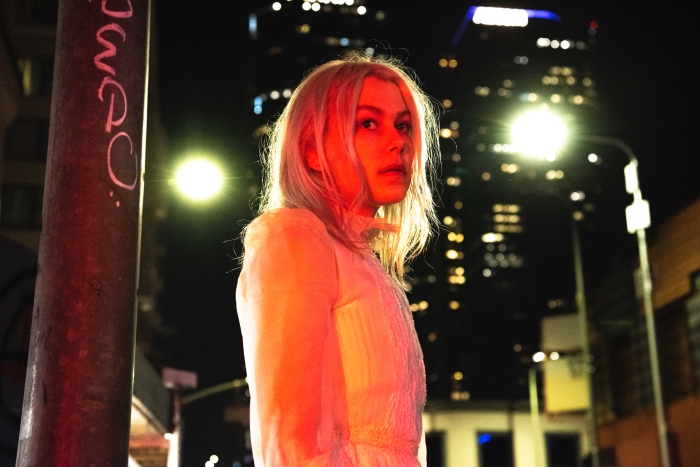 It feels like a long time since Phoebe Bridgers’ debut album ‘Stranger in the Alps’ started soundtracking our lives. Since the release of that record back in 2017, Phoebe has collaborated with Julien Baker and Lucy Dacus in boygenius and Conor Oberst in Better Oblivion Community Center; both of which she toured with relentlessly. Now, Phoebe takes sole control once again on the fantastically titled ‘Punisher’.

There’s an eerie and incidental folkiness to the opening minute-long ‘DVD Menu’ – a song that quite rightly brings back the spectral memories of your favourite old horror movies (yes, DVDs are old now). Following this is ‘Garden Song’, the first single to be released from the album. It has an atmospheric and reflective feel as Phoebe muses over future plans that could involve moving into a house, building a garden and escaping our reliance on technology: ‘When I grow up, I’m going to look up from my phone’; ‘The screen turns into a tidal wave’. ‘Kyoto’ comes next and this 6 Music favourite, that sits in the same kind of nostalgic space as Sharon Van Etten’s ‘Seventeen’ or The War on Drugs’ ‘Red Eye’, finds Phoebe talking about bandmates, touring, helping people get sober and an endless source of frustration: ‘I wanna kill you if you don’t beat me to it’. As a burst of brass is added, Phoebe recalls driving to the suburbs with her little brother to stare at the chemtrails. It’s a beautiful, familial and personal touch.

The title track is full of hazy, twinkly effects and distorted vocals as Phoebe takes on the role of someone who is determined to destroy a ‘perfect’ life (‘The house where you lived with Snow White. I wonder if she ever thought the storybook tiles on the roof were too much’) by hiding in plain sight: ‘I swear I’m not angry, that’s just my face’. There’s a hopeful tone to the Tunng-meets-Haley Heynderickx vibes that run through album centrepiece ‘Halloween’. Complementing the album sleeve and ‘Kyoto’ video that finsd Phoebe in her favourite skeleton onesie, it opens with some dark thoughts – ‘I hate living by the hospital, the sirens go all night. I used to joke that if they woke you up, somebody better be dying’ – before a quick Conor Oberst cameo helps it head into more optimistic territory: ‘Baby, it’s Halloween and we can do anything’. ‘Chinese Satellite’ has a slow-burning approach that recalls sometime-bandmate Julien Baker and a Jarvis Cocker-esque poignancy in its observations: ‘Drowning out the morning birds with the same three songs over and over. I wish I wrote it but I didn’t so I learn the words, hum along till the feeling is gone forever’.

‘Moon Song’ continues in this vein as Phoebe reminisces on a complicated relationship (‘You asked me to walk me home but I had to carry you’) and how this led to a complicated dream about them smiling on her birthday. Again, she focuses on some very personal memories: ‘We hate ‘Tears in Heaven but it’s sad that his baby died. We fought about John Lennon ’til I cried then went to bed upset’. Another early single, ‘I See You’ has self-depreciating thoughts (‘I get this feeling whenever I feel good, it will be the last time’) floating over a keyboard-led sound while ‘Graceland Too’ lives up to its title with its Paul Simon-inspired sound and questioning of whether Elvis ‘believed songs could come true’.

The closing ‘I Know the End’ has a stream-of-consciousness approach as Phoebe talks about travelling everywhere from Germany to Texas, even though ‘there’s no place like my room’. She then takes a more personal approach: ‘But you had to go, I know, I know, I know, like a wave that crashed and melted on the shore. Not even the burnouts are here anymore’; ‘After a while you went quiet and I got mean’. This is followed by talks of lightning, government drones, slaughterhouses, slot machines and a fear of God as the ghosts that are scattered throughout the record come out from the shadows: ‘The end is here. A haunted house with a picket fence to float around and ghost my friends. I’m not afraid to disappear’. The song then takes on a stirring National sound as chants of ‘The end is here’ drive the album to a fitting conclusion.

‘Punisher’ is a remarkable record sprinkled with sadness and timely, important observations about Phoebe’s own feelings and the wider world.