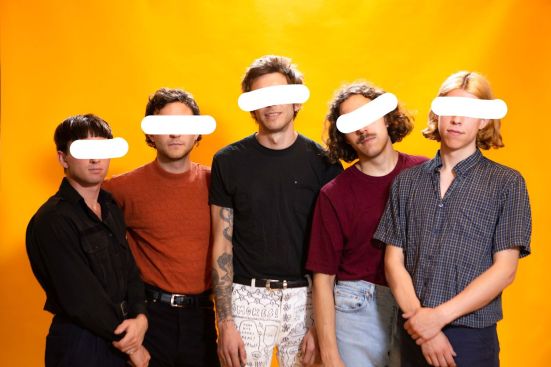 If, like us, you’ve been listening to BBC 6 Music throughout lockdown, Pottery’s ‘Texas Drums’ will already be one of your most-heard songs of the strange year that is 2020. Now the band are ready to share debut album ‘Welcome to Bobby’s Motel’ – will it live up to their hugely celebrated live show?

The title track opener may only be two minutes long but it’s full of distorted and playful vocals and woozy, frenetic guitar lines that bounce between art and glam rock – with a shredding solo thrown in for good measure. Recent single ‘Hot Heater’ follows and this is where the Montreal five-piece really hit their David Byrne-inspired groove. With elements of African music and samba beat and stop-start melodies, you’ll want to join in with the chants of ‘let’s break the chain!’ and ‘cool water’. ‘Under the Wires’ is a song built for festival crowds to bounce along to with its experimental yet melodic Foals sound.

‘Bobby’s Forecast’ has a funky edge James Brown would be proud to call his own while the squawling guitars on ‘Down in the Dumps’ are at odds with its downbeat title. There are also Chris Isaak vibes running through the slow-burning ‘Reflection’ while ‘Texas Drums Pt I & II’ (yes, there’s basically another song after the radio edit) has shouts of ‘drums, drums, drums’ before culminating in a burst of carnival-style euphoria. ‘NY Inn’ starts with a scream before rasping vcals come to the fore alongside handclaps and talk of being in a rut. It also sounds somewhat akin to Anamanaguchi soundtracking a Western.

‘What’s in Fashion’ has a galloping, swaggering start and rhetorical, self-depreciating questions: ‘What’s in fashion? Constant rejection, years of attraction and no one’s there’. Pounding drums and synths collide right at the start of ‘Take Your Time’ and as the tempo kicks in there are call-and-response lyrics – with the backing shouted in unison. The closing ‘Hot Like Jungle’ is another recent single that summons up the spirit of The Boss while also swoooning in romance: ‘I just wanna love you, I just wanna be with you’.

‘Bobby’s Motel’ is a place you’ll want to check into – and while you’re there, why not stay for a while?