As Glastonbury 2013 draws ever closer, we started thinking about times gone by at Worthy Farm. We’ve been lucky enough to be able to attend every Glastonbury since 2003 and despite tumultuous weather, heart-breaking football defeats and just the smallest hint of sunburn over the years, it still remains the highlight of the summer. Great bands, a thriving atmosphere and all sorts of other entertainment combine to make it a place that is truly one of its own. With the iconic Pyramid Stage playing host to some of the biggest names in music, the Park providing a more intimate experience and the John Peel Stage showcasing great new and old bands, there’s always something to see. The Other Stage features a line-up that would be the envy of most major festivals and there’s always treats hidden away on the likes of BBC Introducing, the Acoustic Stage and Williams Green. 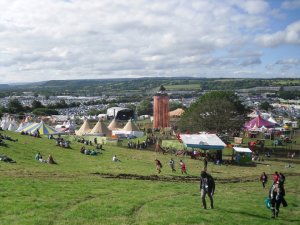 If you want a break from bands, take a chance in the Circus Field, watch a stand-up comedian or have a wander around the kids’ field. Take in the awe-inspiring sculptures that are created specifically for the weekend and walk around Greenfields. From solar-powered cinemas to candle-driven steam boats and speeches, crafts and just plain people-watching, it’s impossible to be bored at Glastonbury. But the bands do remain the main attraction for many, and here’s a look at the Top 5 performances we’ve seen.

Hope of the States were not made for festivals with their sound perhaps being a bit too delicate for the quick turnarounds and dodgy sound, but this performance, off the back of the release of their phenomenal debut ‘The Lost Riots’, was full of heart and passion. It saw a band who truly believed in what they did get through to an audience, who were sodden from torrential downpours, and leave smiling and buoyant. They also blew The Killers, who played just before them, off the stage.

Following the release of ‘The Last Broadcast’, Doves were given the honour of closing the Other Stage back in 2003. A gloriously hot weekend had just seen its first rainfall but Doves would not let this dampen any spirits. Performing with real passion, they brought out the best of ‘Lost Souls’, while ‘Pounding’ managed to get the crowd jumping and then they closed with a double whammy of ‘Here It Comes’ and the old Sub Sub classic ‘Space Face’, a song which had everyone in the field dancing long into the night.

Everyone knew about this secret set in the weeks leading up to 2011’s festival, but after Radiohead had played The King of Limbs in full on the same stage the day before, it was still a delight to see Jarvis Cocker and co arrive on stage to a massive, excited crowd on a delightful Saturday evening. Jarvis started the set with a Cilla Black-style “Surprise, surprise” and the set just got better from there on in. Treating long-time fans to a live debut airing of rarity ‘Like A Friend’, the crowd pleasers of ‘Mis-Shapes’, ‘Common People’ and ‘Disco 2000’ were worthy of a headline appearance and has there ever been a better introduction to a festival set than: ‘I’ve one very obvious, yet very penetrating question to ask you… Do You Remember the First Time?”

“Is everyone feeling groovy?” Headlining the Pyramid Stage on the Saturday, Macca pulled in a phenomenally large crowd and not only treated them to a fireworks-laden and Beatles-heavy setlist, but also some unforgettable stage banter (“Good evening, Glastonburgens” and “Can you rock in wellies? Yes, you can!” being two particular highlights) and the best of Wings, including a stonking opening rendition of ‘Jet’ and a massive sounding ‘Band on the Run’. And then he played ‘Hey Jude’, a singalong which went on way past the curfew.

It was with some trepidation that Blur were booked to close 2009’s festival. Still a much-loved band, Graham Coxon’s acrimonious departure and return was still the subject of much debate and no one quite knew what to expect. A hit-laden set began and the crowd were enjoying the first half of the set and nothing was lacking at all, Blur did everything you’d want from a major festival headliner. And then the band played ‘Tender’… Damon Albarn cried, the audience sang unheralded in unison and this became not just the greatest Glastonbury performance of all time, but one of the greatest live sets ever. Emotions overcame the whole field and from that moment on, this was a special set that is yet to be surpassed.

Glastonbury Festival takes place from 26 – 30 June.
Find out more about Glastonbury at www.glastonburyfestivals.co.uk