After a long two years, the Glastonbury Festival of Contemporary Performing Arts makes its return this week. The 42nd festival at Worthy Farm has already had organisers Michael and Emily Eavis claiming it will be one of the best yet and, as of Monday 24 June, there’s also very promising weather forecasts. Don’t forget to pack your wellies though, 2005 had two of the hottest days of the year followed by an apocalyptic storm which saw two or three months’ worth of rain fall on the site in just three hours…

When there’s no music you’re interested in, you can happily watch world-class circus, cabaret and comedians or just have a wander, but we thought we’d take a look at some of the bands we think will leave their indelible mark on this year’s festivities. Remember, if you’re not at the festival, the BBC’s red button will be streaming a host of stages live into your living room. 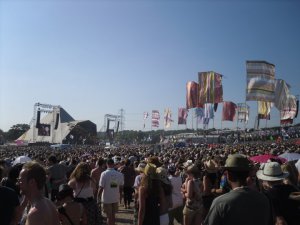 The Rolling Stones, Pyramid Stage, Saturday
We couldn’t really start anywhere else, could we? The Eavises have wanted them to play for years, they rarely play to crowds that aren’t their own and in the midst of their 50th anniversary, they’re finally making their debut on the Pyramid Stage. All reports have hinted they have been on great form this tour and with plenty of special guests rumoured, this has the potential to be an unforgettable set.

Note: The Bootleg Beatles are headlining the Acoustic Stage the same time as the Stones are on. Inspired booking.

Arctic Monkeys, Pyramid Stage, Friday
Hang on, didn’t they headline just the other year? Well, yeah, but that was 2007 – a shocking six years ago now. Over that time, the four Sheffield lads have released a number of quality albums, headlined festivals across the globe, performed at the Olympics and grown up a lot. They didn’t quite hit the heights we know they can last time around but with the brooding ‘Do I Wanna Know?’ set to sit happily alongside the poppier moments, we’re expecting a high-octane set complemented by Alex Turner’s mild-mannered chat.

Frightened Rabbit, John Peel Stage, Friday
Their headline set at 2000 Trees in 2011 marked a band ready to make the step up to the big stages at major festivals and we’re expecting the John Peel Stage to be full of hearty sing-alongs and plenty of cheer come Friday afternoon. The songs from ‘The Midnight Organ Fight’ have now become festival anthems and with the latter albums also full of inspiring moments, this is set to be one of the sets of the weekend.

Villagers, John Peel Stage, Sunday
Conor O’Brien and his faithful band will gently nurse hangovers that are still floating about come the afternoon of the last day of the festival. A more subtle affair than many of the bands you’ll have seen, he sings from the heart and there’s sure to be more than a few tears when he breaks into the likes of ‘Becoming a Jackal’, ‘Nothing Arrived’ and ‘My Lighthouse’.

Phoenix, John Peel Stage, Sunday
The Coachella headliners will close Glastonbury in the relatively intimate atmosphere of the John Peel tent. With ‘Bankrupt!’ already topping many people’s album of the year polls, this will be a thrilling way to say goodbye to Worthy Farm for another year. Expect lots of tired legs doing their best to have one last big party before returning to everyday life.

65daysofstatic, William’s Green, Friday
Their brutal mixture of math and post rock is loud, intense and captivating from the first to last minute. Tucked away on a hidden gem of a stage, this is the perfect performance for anyone who wants to see something with a bit more bang.

Revere, William’s Green, Saturday
Playing before an extremely special dual set from Rufus and Martha Wainwright, Revere’s emotional mixture of post-rock and pop sensibilities is certainly festival-sized. With striking visuals a big part of the live show as well, this is sure to be a treat for all the sense.

Everything Everything, William’s Green, Sunday
The Mancunian band’s second set of the weekend promises lots of high-pitched harmonies and quirky pop moments, as well as a passionate sing-along to ‘Duet’.

Cat Power, The Park, Sunday
Playing at dusk in the beautiful setting of the Park, a festival within a festival itself, Charlyn Marie Marshall is set to deliver a rousing performance to close the weekend on the Park stage (although the early finishing time hints there could be a surprise to come shortly after? We’re just happy we can see her and then Phoenix…). Sure to bring out the best of last year’s gorgeous ‘Sun’ album, she also has an extensive back catalogue to draw from and this could be an eye-catching and exhilarating show.