As soon as the sun sets on Reading Festival, ArcTanGent and Bestival, it’s time to think about the cold and dark nights when gig season gets back into full swing. The likes of Frightened Rabbit and Everything Everything (with Dutch Uncles in support) will be playing throughout the country, while there are also some tremendous shows around the Hampshire, Berkshire and Surrey area. 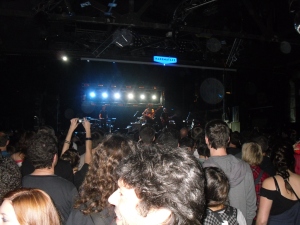 But first, coming up before those festivals, Dengfest finds Our Lost Infantry, I Saved Latin and Dragons That Make Love to Pandas heading up an all-day event at Guildford’s Boileroom on 20 August. A little further afield and Brontide will be showcasing songs from their new album at an intimate London show on 28 August. Run by our friends at Fools Paradise, the gig will see stellar support from Her Parents and Lay it on the Line and tickets cost only £6.

New grunge heroes Drenge also make an appearance at the Boileroom on 16 September. The Wilde Theatre in Bracknell is a wonderful venue to see a concert in and while it’s perhaps better known for quieter acts, Three Trapped Tigers are making a brutal appearance there on 13 September. A show full of loud intensity and pummelling drums, with these stylish surroundings it will be a most excellent contrast. The following day sees a host of brilliant bands head down to the coast for Southseafest. An all-day event with bands playing up and down the famous Albert Road, there will be appearances from the likes of Future of the Left, Veronica Falls and The Physics House Band, while the annual BSM and Alcopop! stage sees the likes of Stagecoach, The Computers, Gunning For Tamar and Anamanagucci tearing up the stage. There are far too many other great bands to list, but with tickets available for just £18, it provides great value for money.

21 September sees our fellow music enthusiasts at Rose Coloured put on their own show in the local area and they’re promising a night of great new music, while Tall Ships come to the Boileroom on 27 September, along with support from Chalk among others. 28 September sees Sky Larkin make their third visit to Aldershot with another show at the West End Centre, and they’ve been good enough to allow new Alcopop! signings, the brilliantly named Radstewart, to be the main tour support. With new single ‘Loom’ hitting the airwaves recently and wowing the indie-pop masses, big things are expected from Sky Larkin’s forthcoming third album ‘Motto’, released on 16 September.

2000 Trees favourites Jim Lockey and the Solemn Sun will be playing at the Boileroom on Friday 4 October and you’ll also be able to hear Rachel Sermanni’s elegant brand of folk storytelling at the West End Centre on 23 October. Goldheart Assembly will also be bringing their great pop songs to the Westy on 1 November.