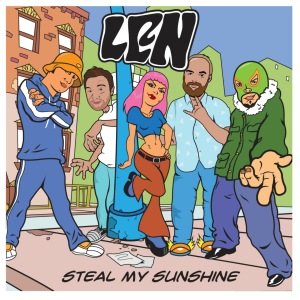 Alcopop! Records are all set for their 100th release, which in itself is enough reason for celebration, but the fact that the release will be Len’s seminal pop classic ‘Steal My Sunshine’ is sure to raise a smile for anyone who’s ever bought a record from the label with the tagline ‘Fuckin’ Indie’.

Over the years, Jack Clothier and Kev Douch have released a number of phenomenal singles, EPs and albums via Alcopop!, curated many legendary festival line-ups and embraced the fact that there still is a market for the physical format of music. From a Gunning for Tamar watch to a Johnny Foreigner FrisbeeEP and even a full-size bicycle, Alcopop! have given fans real keepsakes whenever one of their new favourite bands released new material – and what a roster they have… Stagecoach, My First Tooth, Fight Like Apes and many more have all found a home on the label. For this release, you can get the song in cassette tape format, as a T-shirt or even as a strikingly cool pair of sunglasses.

We don’t need to say much about the song, do we? It’s the greatest summer single of all time (admittedly, The Wannadies’ ‘You and Me Song’ runs it close…), it won’t fail to make you wish you were driving open-top through hotter climbs and, for those of a certain age, it will rekindle memories of drinking far too much Sunny Delight, playing football from dawn until dark in the local park and Austin Powers being one of the funniest film characters of all time. That the artwork has animated versions of Jack and Kev just tops it all off.

Thanks to Alcopop! for the good times, and here’s to another 100!

The remastered version of ‘Steal My Sunshine’ is out on 16 June.