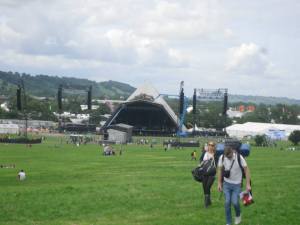 The moment Luke Sital-Singh plugged in his guitar for his late morning show over at the Park, the heavens opened. Jovially telling us ‘It’s not raining’ and that the abrupt storm would just add to the ambience of his soul-bearing songs, no-one seemed to mind too much as they intently listened out for delicately introspective lyrics, songs of lost love and even one about a whale trying to find a mate. Having seen Luke play many times around Kingston, it was great to see his songs translate so well to the outdoors festival stage and the crowd was kept attentive throughout. Circa Waves’ shoegaze indie, mixed with some far-reaching math-rock elements, was an entertaining half an hour on the Other Stage that helped bring out the sun, although their joke about bringing out James Hetfield (they had to repeat ‘James Hetfield from Metallica’) coming on for a guest slot sadly seemed to fall on deaf ears.

Heading over to the John Peel Stage in the early afternoon to catch the much-hyped Wolf Alice, we caught what must have been one of the defining moments of the weekend – and one which sums up the respect and awe that the genuine bands have for the Eavises and their annual party – singer Ellie Rowsell beaming from ear to ear, while tears of joy fell down her face throughout the set. Constantly thanking the audience and providing plenty of riffs alongside tender vocals and a pulsating rhythm section, there are elements of grunge in their sound but also dream-pop elements in sync with the likes of Swim Good.

After this, it was time for the Manic Street Preachers to bring out a career-stretching set on the Other Stage that opened with ‘Motorcycle Emptiness’ and ended with ‘A Design For Life’, via sing-alongs to ‘If You Tolerate This, Your Children Will Be Next’, ‘Everything Must Go’ and rare live performances of album tracks from ‘The Holy Bible’, a seminal record that is now 20 years old. They also aired a few tracks from their new record which have a more industrial European feel. Following them, it was time for one last long walk to the hill behind the Park for a wonderful view of John Grant’s passionately performed set and then Mogwai’s ear-shattering headline performance. Both Worthy performers, especially in the more intimate settings of the Park, this finished a more sedate day at Glastonbury with a flourish.