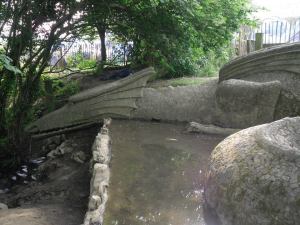 Feet were aching, tiredness was kicking in and a shower was needed, but everyone at Glastonbury was determined to finish the weekend in style – none more so than The Subways whose early morning set on the Other Stage was simply pulsating. Ten years after making their debut on the same stage, in similar muddy circumstances, the band opened with ‘Oh Yeah’ and despite not being so baby-faced anymore, they’ve lost none of their spiky youthful enthusiasm. Songs about having parties, crowdsurfing and brilliantly joyous interaction were all part of the show which certainly brought a smile to some very tired faces. Another trip to the Park to see Thunderbirds Are Go!, a special tribute to Barry Gray, the man responsible for the soundtracks of Gerry Anderson’s childhood favourites. An orchestra played out these familiar pieces in supreme style and as it was so different – and well received – we hope the organisers will endeavour to bring similar treats to the festival in years to come.

Dolly Parton was the must-see act for the vast majority of Glastonbury goers this year and with over 100,000 cramming into the Pyramid Stage field to watch her show, she had a lot to live up to. The sound was turned down right at the back of the field where we were standing, so we can’t make a comment on the miming rumours, but she beguiled the crowd with her cheeky anecdotes, natural warmth and sing-alongs to ‘Jolene’, ‘9 to 5’ and a closing rendition of ‘I Will Always Love You’. Leaving during this finale, we headed to the John Peel Stage to catch Death of the Blogger favourites Bleachers. Fun guitarist Jack Antonoff’s side-project was making its debut in the UK and sadly there were not too many there to witness it (although from a personal point of view, it was glorious to get some restbite from constant crowds…), but this didn’t seem to affect the band, complete with double drummers, too much as they delivered a refreshing blend of New Jersey indie pop anthems. Perfect summer songs, there were elements of Springsteen (including one awesome sax solo) but also more contemporary acts like The Killers and Gaslight Anthem. There was even time for a cover of Tom Petty’s ‘Don’t Come Around Here No More’ before a rousing finale of Bleachers’ YouTube smash ‘I Wanna Get Better’.

One last trek to the park was rewarded with a simply stunning performance from St. Vincent. Annie Clark slinked around stage aggressively shredding her guitar with some style and an air of Maleficent-style mystique and mystery. Moments of theatrical brilliance just added to the glorious avant-garde racket the band was making. After starting with a robotic voice telling people to put away their electronic equipment and enjoy the show, it finished with Annie unexpectedly rushing into the crowd and emerging with a flat cap. After giving a quick bow to the audience, she disappeared into the evening sun, leaving everyone quite mesmerised and raptured by what they just witnessed. How do you follow this up? We headed to the Avalon Stage, via the 50p Tea Tent for a slice of cake and refreshing grape juice, to watch Dry the River as our final act of 2014’s festival. Playing many songs off their soon-to-be released second album ‘Alarms in the Heart’, the band look set to head into the stratosphere if these anthems are anything to go by. Slightly more accessible than those off ‘Shallow Bed’, there was even one barmy and brilliant song that sounded akin to Tall Ships playing Britpop! A stirring rendition of old favourite ‘No Rest’ was enough to make your hairs stand on end, and was a fitting finale to what had been another unforgettable (and rather painful, if you have wellies that are the wrong size…) weekend on Worthy Farm – ‘I loved you in the best way possible’.