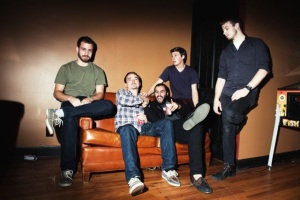 After forming in 2007, releasing their first album in 2011 and playing extensively throughout the United States and in Europe (including a London show with our very own Our Lost Infantry) over the past seven years, Prawn have returned with their follow-up to 2012’s ‘Ships’ – the ornithologically titled ‘Kingfisher’. Complete with artwork of the beautiful bird on its sleeve, will this be the record to see them take flight?

The band’s prog-rock influences are laid bare on the mesmerising opener ‘Scud Running’. Rhythmic and confidently stadium sized, it recalls the likes of the Appleseed Cast alongside the more interesting elements of Snow Patrol. ‘It’s a long way away’ is repeated over and over again while the shrewd lyrics also offer a tantalising glimpse into the band’s thought process – and it’s pretty dark: ‘The breath beneath the services, it weighs me down…’. Being part of the impressive Topshelf Records roster, inevitably Prawn have been thrown into the so-called ‘emo revival’ and ‘First as Tragedy, Second as a Farce’ would happily sit alongside You Blew It! and Into It. Over It’s strongest work. While never forgetting the importance of a good pop hook, singer and guitarist Tony Clark bellows out the lines: ‘I am fucked. I am my father’s son.’

These reflective and self-depreciating lines are a common theme throughout the whole album. Even the more traditionally melodic ‘Prolonged Exposure’ features deeply personal lyrics (‘you’ and ‘I’ must be the most common words spluttered during its five minutes) and the slightly self-absorbed statement: ‘I last drank when you walked in’. There’s a touch of ‘Opus 40’-era Mercury Rev or The Antlers in ‘Dialect Of’, a fragile song that’s starry-eyed lyrics – ‘You carry me over’ – find a perfect foil in the post-rock guitars and marching military drums. The band head back to their punk-rock roots on the Lemonheads-y ‘Glass, Irony’ – a track that would also have fitted in perfectly with the mid-00s explosion of bands like OK Go and Hot Hot Heat… And that’s a compliment.

‘I never thought that the wind would be hissing your name into the leaves’ is the stunning opening line of ‘Absurd Walls’, an ode to heading back home to the East to reflect on the things that have gone wrong – and whether it’s all your fault: ‘I fucked it, you know it’. Ryan Adams-style mourning and self-awareness run throughout this song as Tony urges a close companion to live their life: ‘Go be with the ones that you’re missing, takes a chunk out of me to see you leave…’. With American Football-style guitar work, the song ends on a surprisingly optimistic note: ‘When you get there, I’ll keep up.’ Things are turned up a notch with the infectiously catchy ‘Thalassa’, a bona-fide pop hit. The band represent their New Jersey heritage with a touch of brass while the shout of ‘I’m glad you found clarity’ shows how sometimes it’s OK to let things go and run their course… It’s the perfect complement to the song that came before it.

Sparse post rock elements glisten throughout the introduction of the closing song ‘Halcyon Days’, while there’s also another striking delivery of some dramatic lines: ‘Bad bones in the flesh, bad blood in our veins’. Scattered riffs and beautiful melodies collide as the song falls into a finish that The National would be proud, complete with distinctive backing vocals and a throbbing drum sound, all while the band sing: ‘We keep fighting waves’. With ‘Kingfisher’, Prawn are set to make quite the ripple. Like the bird the record is named after, it’s bright, fascinating and sure to make you smile.

‘Kingfisher’ is released via Topshelf Records on 12 August 2014.