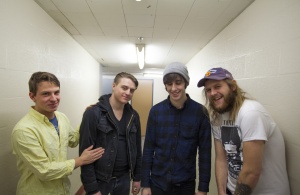 We asked Joey Ashworth from itoldyouiwouldeatyou, Our Lost Infantry and Death of the Blogger to review the new album from Connecticut punks Sorority Noise. The album is released in the UK via Topshelf Records on 29 June. Here are Joey’s thoughts:

When Forgettable came out, what I loved was the slapdash production, the sloppy playing and the band’s ability to make a full song feel like it lasted about thirty seconds, in a good way. Somehow ‘Joy, Departed’ manages to get rid of almost all these aspects while still being a blindingly good record. It’s not to say that they’ve completely hopped genres – this is clearly still the same band – but it’s like the same band with the emphasis switched towards something way more grown up.

A big part of what sets this record apart from other ‘emo-revival’ (sorry) albums is the trademark open-hearted lyricism the band perfected on Forgettable. In the lead-up to the release of this record, Cameron Boucher has made a point of stepping away from the idea that the band are glamourising depression or advocating sadness as ‘fashionable’. Given that the band’s first record could be best identified by its nihilistic lyricism and strong sense of aesthetic, this was obviously an important and admirable point to make. To this end, you can feel he has tweaked his lyricism a little, focusing more on pulling yourself out of the darkness rather than wallowing in it. Nowhere is this clearer than on tracks like ‘Mononokay’ and ‘Art School Wannabe’, with lyrics like: ‘I’ve gotten better at being me’ and ‘Maybe I’m not as dark as I think’. If it weren’t for the unmistakable honesty of Boucher’s turn of phrase, you might be forgiven for thinking these words didn’t come from the same writer who made a hook out of the line ‘… and I’ll die’ on their last record.

Quick sidebar: It would be beyond boring of me to spend too much time on the ways in which this record so clearly draws on Weezer for influence, not to mention disrespectful to a band that have clearly found their own, non-derivative sound. Sorority Noise are in a scene that scarcely releases a record that doesn’t have a least have one track you might describe as ‘Weezer-esque’. So I’m just gonna take a minute to say ‘parts of this record sound a lot like that Pinkerton record by that Weezer band you like’ and leave it at that.

Another strand that flows throughout this album is the band’s experimentation with a much, much fuller sound. The production has clearly stepped up a notch and the instrumentation has been greatly expanded, using multilayered guitar parts and far more string parts than the last record. Much more than this though, there are sections on this record that are really driving and atmospheric in a way more reminiscent of a band like Sigur Ros or The World Is A Beautiful Place… than the band who put out ‘Forgettable’. The track that nails this the most is definitely ‘When I See You (Timberwolf)’, which builds to an incredibly satisfying conclusion that feels post-rock as hell without sounding like anyone other than Sorority Noise at heart. I’d also like to take a moment for the string part on that particular song – really carefully put together without overpowering the rest of the song. It’s touches like this that make the record and particularly this song worth revisiting a hell of a lot. In one record, Sorority Noise have gone from a fun band to play at a party where you want sad pogo jams to listen to with your #sadkid friends to a band who could fit on a bill with someone like The Dear Hunter without being too out of place. That they’ve done this while still being recognisably the same band can only be some kind of arcane blood magyk.

The last place I expected Sorority Noise to go after Forgettable was towards a more cleaned up, (almost) prog sound, but now they’re there, I’m totally down with it. While there are a couple of missteps where there seems to be more of a focus on atmosphere than content (‘Your Soft Blood’ in particular), this record is so promising that they don’t drag it down. Sorority Noise could have easily just put out Forgettable Part 2: Let’s Get Silly, and a bunch people (including me) would have lapped it up, but they resisted that and it totally pays off.