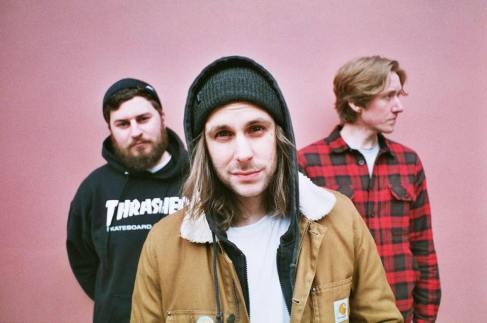 Hailed by Biffy Clyro as ones to watch and with acclaim from Daniel P. Carter (who also provided the artwork for this album), Black Foxxes have already gained a loyal following and their various gigs and festivals have helped them enhance this reputation further. ‘I’m Not Well’ is the Exeter trio’s debut album and it’s coming out via Spinefarm Records.

There’s a touch of Pearl Jam in the grungey title track that opens the album and it soon becomes apparent that the important issue of mental health is going to be a recurring theme throughout every track. On ‘I’m Not Well’, Mark Holley sings about how ‘I can’t ever sleep at night, all the pain that’s in my head’ before agonisingly stating ‘I’m not well, teach me how to breathe’ – all while thunderous drums increase in volume. It’s not the last time Mark opens up about fears and anxiety. ‘Hush’ follows and this is a slice of power-pop that would sit nicely next to Biffy, although it also has a welcome touch of early ‘00s British emo a la Jetplane Landing. With crunching riffs and some tantalising melodies, it’s a short but very sharp song. Black Foxxes take things down a little on ‘Whatever Lets You Cope’, although the subject matter is just as important. Mark sings about the drugs hitting home and a ‘kaleidoscope detached into a choke’ before touching on themes of time stopping still. With real gusto, he demands ‘don’t waste your time’ before backing off and asking ‘just how far would you go when the drugs aren’t hitting home?’

‘River’ finds Mark singing ‘I promise not to change the way you look at me’ and then pondering why somebody would ‘keep it up, move along, take away what we once begun’. It’s at this point that the singing starts to morph into La Dispute-style screams. There’s a scuzzy directness to the opening of ‘Maple Summer’ as the band sing about mental state and a ‘never-ending torture’. As the song breaks down, there is an air of serenity as words about the ocean are sung. Then the guitars come back in and Mark heart-wrenchingly states: ‘You were escaping me, you were erasing me’. There are some superb rhyming couplets in ‘Bronte’ that say so much in so few words: ‘With the weight now shifting, I was lifting the blame’; ‘Selfishly I rot into a cage. Suddenly, selfishly, you saw my rage’. ‘Waking Up’ has more of a Basement feel to it, with delicious hooks and the song’s title being sung over and over again.

There is talk of being adventurous and making positive changes at the start of ‘Slow Jams Forever’, although these soon make way for darker things: ‘I need to go, there’s a fire burning in my chest shouting’. The band list Nirvana and Ryan Adams as influences on their Facebook page and this song is an awesome amalgamation of both. The intimacy of ‘Pines’ closes the album and in its quieter opening, there is extra emphasis on the words like ‘I can hear you crumbling’ and ‘If you took your knife to your twisted life, would you leave me behind? There’s a hole in your heart’. What follows is a noisy crescendo that Black Peaks would be proud of and some hugely passionate screaming as the record comes to an end.

Black Foxxes describe their sound as ‘ragged noise’ and while that is an apt description, ‘I’m Not Well’ has far more going on, both lyrically and musically, and so much more depth. It’s a cathartic 43-and-a-half minutes that covers issues that affect us all in some way or another. It deserves your attention and to be played as loud as possible.

One thought on “Black Foxxes – ‘I’m Not Well’ album review”