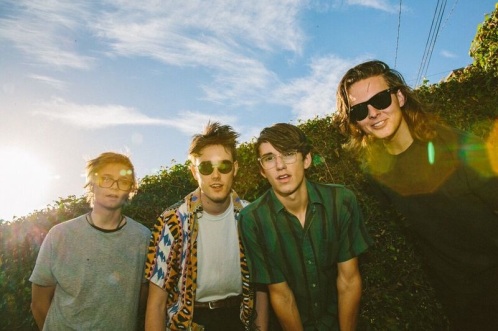 Hailing from Minneapolis, Hippo Campus have already toured with the likes of Real Estate and Modest Mouse and these bands give an indicator of what they sound like. ‘way it goes’ (they’re fans of lower case letters) is an intelligent and sunshine-drenched piece of indie pop that you can imagine will quickly be filling the 6Music airwaves.

Red Nightfall contacted us with an email quoting High Fidelity (‘What fucking Ian guy?’ in case you were wondering) and the Toronto act’s second album ‘Anna, Don’t Disappear’ opens with this track. It has a distinctly ’80s ‘English’ indie feel in line with The Smiths but then throws in the haunting atmosphere of The Dears.  The band make use of Chinese instrument and glockenspiel to add another level to the song and there’s a cleverness in its breakdown. There’s also a hearty line that sums up the band’s hand-on-the-sleeve anthemics: ‘Let it consume us, follow it too far, a love like last year’s’.

Winter Coat – ‘Into the Blue‘

A Cardiff four-piece who specialise in dreamy and gentle shoegazing sound, Winter Coat sound somewhat akin to Beach House having a jamming session with Camera Obscura. ‘Into the Blue’ soars and speeds up throughout and the lovely atmospherics perfectly complement the lilting vocals.

Ahead of a tour with The Big Moon, Swedish band Francobollo have released ‘Good Times’ – a positive three minutes that combines a Britpop sentimentality with fuzz-filled slackerpop vibes. The band sing about how ‘There’s something in the air that makes me laugh’ and repeat the words ‘good time’ with some really dry wit.

There’s a touch of Evan Dando in ‘Dead Beat’ but it’s also a song that manages to throw in country references and even – towards its climax – a shoegazey atmosphere. Goddam Nobody also offers a fine line in self-depreciation as he ponders if he is ‘yesterday’s news’ and pores his heart out as he discusses ‘doing laps of the city to see if I can figure things out’.