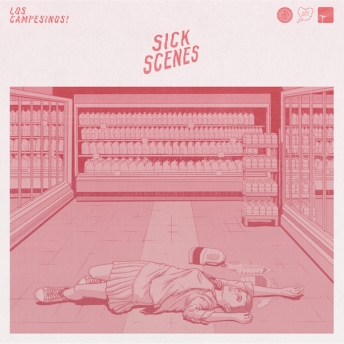 It’s been far too long since Los Campesinos! released any music but now after an almost three-year break where various members went back to their day jobs (or toured with Perfume Genius!) they have returned with sixth album ‘Sick Scenes’, a record that the band state is ‘set upon a background of non-league football, prescribed meditation and crumbling hometowns’.

‘Renato Dall Ara (2008)’ kicks off proceedings and it comes in with the same kind of playful harmonizing, hardened spirit and self-depreciation that first brought Los Campesinos! to attention. There’s a bitterness as Gareth spits out lyrics about various unpleasant individuals: ‘His girlfriend works the door there; he does not intend to pay her’; ‘Daddy came out of retirement. He took a hobby as a PCSO. Let me level this is an indictment. Only a part-time grass but a full-time arsehole’. Gareth’s wordplay and references have always been a defining characteristic of LC! And here he manages to reference Interpol’s seminal debut: ‘Things change but Stella’s a lager and boy she’s always drowned’. After this is ‘Sad Suppers’, a frenetic song that marries punky drums with a more orchestral, chamber-pop aesthetic. There are gang-chanted vocals about epiphanies and ‘chucking up in your own hands’ among the music (written by Tom, who has clearly been inspired by his experiences touring with Perfume Genius) that brings to mind The Most Serene Republic. ‘I Broke Up in Amarante’ will already be familiar to any LC! Fan and is a Cloud Nothings-esque earworm. It also Gareth laying his heart bare as he explains how ‘It seems unfair to be an overflow for empty’; tells his fellow bandmates to ‘help me out’; and of course, there’s a delightfully apt football reference: ‘Dreamt I’m anchoring that midfield like the anchor in my midriff’.

Misery abounds throughout Los Campesinos!’ music, and there’s even a song called ‘A Slow, Slow Death’ on ‘Sick Scenes’. It falls into the same kind of territory as ‘No Blues’ and ‘Hello Sadness’ as it is an emotional and wistful look at mortality: ‘Anxiety in my chest, heart under duress’. There’s a very haunting atmosphere as Gareth sings about how he’s ‘preoccupied for days now by nostalgia waves I hated the first time’ and how we ‘wean a small, hopeless nation’ (did someone say Brexit?). ‘The Fall of Home’ is also a more sombre account of the way society has gone and how moving away is not always for the best: ‘Left your home town for something new. Don’t be surprised now it’s leaving you. Another weekday night alone, the rise of rent, the fall of Home’. ‘5 Flucloxacillin’ sounds like a single from its very first note and combines talk of mental health with the way people are treated: ‘A pile on of OAPs crashing in my slipstream. I turn ‘shut up your faces, I’m not your domestique’. They say if they had got the victory, they’d act with so much more humility. They say if they had got the victory… well, I guess we’ll never know’. Belted out with passion, it perfectly sums up the mood of a generation. This is backed up by the world-weary view that ‘depression is young man’s game’ and later on in the album ‘There is beauty in the world I’ve been told by people I have nothing but trust in…’

Clocking in at over five minutes, ‘Got Stendahl’s’ is the longest song on the album and it’s a melodic piece that features a refrain of ‘At least when we’re encased in concrete, we’ll be safe’. The final track on the album, ‘Hung Empty’ is almost spoken word and is full of fun Bearsuit-style keyboards and ‘la, la, la’s’ – but with elements of Arab Strap’s claustrophobic musings peeking over. It’s a song that laments being in your 30s in the world today and being part of a group of people who face a very uncertain future: ‘We’re glad to be loved but we’re lonely and we feel like we’re the only ones’; ‘We’ve no right to call it old age but this certainly ain’t youth no more. This certainly ain’t youth’.

Rather aptly, the final lyrics delivered on ‘Sick Scenes’ are: ‘But what if this is it now, what if this is how we die?’ It’s an album full of uncertainty about the world today, the fragility of mental health and the importance of football, but all encased in pop hooks and melodies that it would be futile to resist.