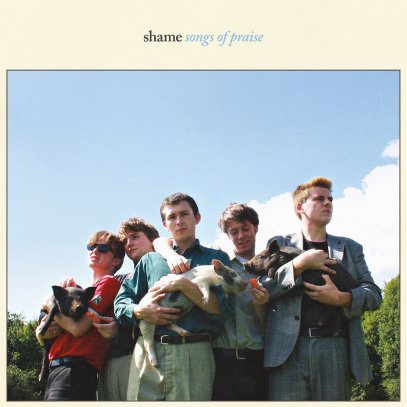 South London five-piece Shame have only been together 3 years but have already played over 130 shows and supported the likes of Fat White Family, Warpaint and Goat Girl. They played one of THOSE Great Escape shows that ended with a chandelier being removed from a ceiling, which in turn led to them making a performance at Pitchfork Paris and released ‘Visa Vulture’, a vital and timely takedown . With such an incredible history already, it’s no wonder that ‘Songs of Praise’ (out on Dead Oceans) has become one of the most anticipated albums of the year of Theresa May’s stance on immigration.

Recorded in just 10 days, ‘Songs of Praise’ is a collection of 10 timely songs that tackle the important topics young people all over the country are passionate about and clocks in at under 40 minutes, something the band are very proud of: ‘We wanted our first album to be concise and to the point. No bullshit.” Idles-esque guitars signal the beginning of album opener ‘Dust on Trial’. It’s a dark and dirty song that combines elements of fuzzy new wave with whisper-spoken vocals that would give Tom Waits the shivers: ‘I’ll always be here to hold your hand and walk you to the promised land’. Following on from this are the more accessible pop-rock hooks of ‘Concrete’; a song that contains call-and-response vocals that capture the feeling of not knowing your place in the world: ‘Is she hearing me? Not a little bit’. Singer Charlie Steen then goes on to ask ‘How does it feel? How does it taste? Would you rather it’s real or it’s fake’ before declaring, with no little pride, how ‘now it’s time for hope’.

‘One Rizla’ combines the rough-and-ready post-punk style with the snarling attitude of Oasis: ‘My nails ain’t manicured. My voice ain’t the best you heard. You can choose to hate my words but do I give a fuck?’ Full of self-depreciation, it’s a tribute to young lust with the words ‘I’m not much to look at and I ain’t much to hear but if you think I loved you, you got the wrong idea’. ‘The Lick’ is a wickedly funny rally against the current state of the world that takes in everything from weekly visits to a gynaecologist to MP3 players that have been recommended by the New Musical Express. You can feel Shame’s frustration with the current throwaway culture as they state how we need something ‘relatable, not debatable’. There are also nods towards grunge and garage rock on ‘Tasteless’ and ‘Lampoon’, the former of which has the cutting remark ‘I like you better when you’re not around’ running through it with just the right amount of sass.

The album comes to a close with ‘Angie’, a 7-minute slow burner that has the band first wishing they were still with a loved one (‘In all my dreams she still remains’) before then evaluating themselves and urging the subject to ‘Scratch me away out of your skin’. They then ask if they’re actually that bad before urging them to ‘disappear into nothing and find your happy place’ over some striking harmonies. ‘Songs of Praise’ is an album that deserves to be widely lauded.