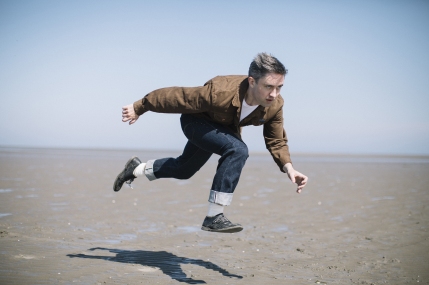 Ivor Novello Award-winning Conor O’Brien’s Villagers project returns with fourth album ‘The Art of Pretending to Swim’. A huge favourite with Spectral Nights ever since we first heard ‘Becoming a Jackal’ back in 2010, this record promises a fuller sound than his previous album = the sparse and intimate (yet no less special) ‘Darling Arithmetic’. Written, produced, mixed and primarily performed by Conor himself, ‘The Art of Pretending to Swim’ is a labour of love that finds Conor pondering how today’s technology can contribute to all our existential fears.

Sea bird sounds signal the opening of ‘Again’, a song that finds Conor talking about finding a space in his heart, God (religion and faith is a recurring theme on this album) and eventually finding something in ‘the shape of art’. Following this is recent single ‘A Trick of the Light’ with its mantra of ‘I’m a man of the faith’ and harrowing self-examination: ‘It’s time that I let go of thing that I can’t control’ before delivering melodic metaphors about nature’ amidst eerie atmospherics and a big bass sound.

‘Sweet Saviour’ is an acoustic-based song with Conor revealing how a picture of a loved one can transport him to another place and bring up all his fondest memories: ‘I’ve been loving you now for what feels like eternity’. Conor also manages to fit the phrase ‘transcendental memory’ in the sweetest way imaginable, while ‘Fool’ is another 6Music favourite that harks back to the Paul Simon-esque sound of Villagers’ debut record. It’s instantly appealing and hugely emotional: ‘The future has been written but the pen’s run out of ink’; ‘Here is my bleeding heart’.

‘Love Came’ combines the poignancy of The Antlers with the soulful sincerity of Loney, Dear as Conor examines the nature of relationships and how much joy and pain they can bring: ‘Love came with all that it brings including the fact that it stings like a motherfucker’. This is then backed up by Disney-esque strings, soulful guest vocals and bursts of brass. ‘Hold Me Down’ is a cousin of previous Villagers favourite ‘Hot, Scary Summer’ as Conor offers you to ‘come outside, pick a fight, ruffle my feathers’ and continues this direct nature with a demand of ‘hold me down until I can’t understand who I am’ and then laments the weather and how it’s affecting his own anxieties and mental health: ‘the sun is out and I need it like I need a hole in the head’.

The record closes with ‘Ada’, a subtle effects-laden piece with Conor celebrating love in all its forms and how friendship is so important. It has some seaside effects to round off the record in the way it started and a harmonious climax that will give you goosebumps. On this record, Villagers have once again brought songs that can’t fail to get inside your head and leave you with all the feelings.