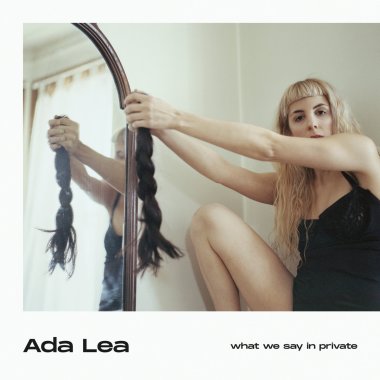 Saddle Creek signing Ada Lea’s album ‘What We Say in Private’ continually evolved over the course of its writing and recording process, leaving us with a debut to savour. Montreal native Ada is also a painter and visual artist and these passions have added to the colourful collection of songs that make up this record.

The War on Drugs-meets-Deerhunter psychedelic guitar hook of ‘Mercury’ opens the record and this song finds Ada singing about ‘trying to escape’ before taking a more gothic turn halfway through. Following this is ‘Wild Heart’, a sparse and quieter song that takes elements of folktronica and shakes them around in unexpected ways while Ada delivers some clever and cryptic lyrics: ‘A ring of dancers form around the house to surround us and I pray that every door is shut’. Recent single ‘The Party’ has a ‘Digital Ash’-era Bright Eyes feel while ‘For Real Now (Not Pretend)’ opens with Ada asking one pressing question: ‘So you wanna dance?’ This song then veers into more electronic soundscapes as she first declares ‘Today is gonna be a good day’ before things take a dark turn: ‘I heard you wanna die, be confetti floating in the sky to celebrate your life’.

‘What Makes Me Sad’ finds Ada tipping her toes into jazz before veering into more of a Spector-esque ‘Wall of Sound’ feel, while ‘The Dancer’ has her opening her heart from the very first line: ‘Some days I feel like dancing but some days I don’t’; ‘Some days I just sit and watch the sun dancing through my window’. It occupies the same kind of space as early Stars with its passion, emotion and melodic hooks. ‘Yanking the Pearls Off Around My Neck’ is another introspective piece about looking forward: ‘Soon, so soon, I can be my own girl again’. It’s a quiet song with real focus on the words, especially when Ada takes the opportunity to second-guess herself: ‘You always follow the sun and I the moon, or have I misremembered?’ The closing ‘Easy’ burst into life with anthemic guitars that build up to the defiant opening lines: ‘When you go, close the door. Leave the keys so you can’t enter any more’. It finishes with repeats of ‘On again, off again’ before Ada admits it’s not easy to forget difficult experiences.

Veering between absorbing and ambient, and with plenty of recordings of nature and real-life sounds giving it a grounded feel, ‘What We Say in Private’ is a completely compelling album you’ll want to be shouting about in public.