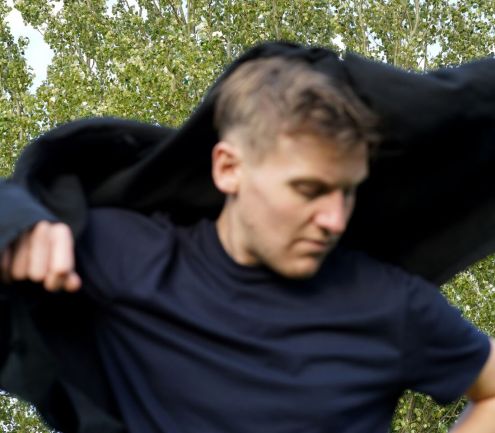 Dutch Uncles songwriter Robin Richards has shared ‘Gefail Yr Ynys’ (pronounced”gev-eye-al erhhr unnus” and translated as ‘The Island’s Forge’), the second song to be shared from his upcoming debut solo EP ‘Castel’ (out on 6 December via Prah Recordings).

Constructed from samples of a blacksmith working in a forge in Caernarfon, Wales, the ‘found-sound’ techno-jungle piece is unlike anything you’re likely to heard before. There’s a rhythmic joy to be found in the atmospheric sounds and Robin doesn’t hold back as it reaches its clattering climax.

Robin Richards offered some more info about the song:”When I first visited the Gefail Yr Ynys forge at the start of my artist residency in Caernarfon, I wanted to utilise the room’s sonic potential and craft rhythms out of the incidental sounds recorded while the blacksmiths were working.”

“I spent a day recording Dylan Parry sculpting a Welsh dragon from iron in the forge. The initial rhythm heard is the sound of the blacksmith banging the metal dragon into shape and knocking ash off the hammer. I noticed that the blacksmith’s thudding had a natural 120bpm rhythm to it.”It also features recordings of the boats docked in the harbour and a steam train, adding layers to a piece dedicated to the industrial heritage of the Welsh town and its people.