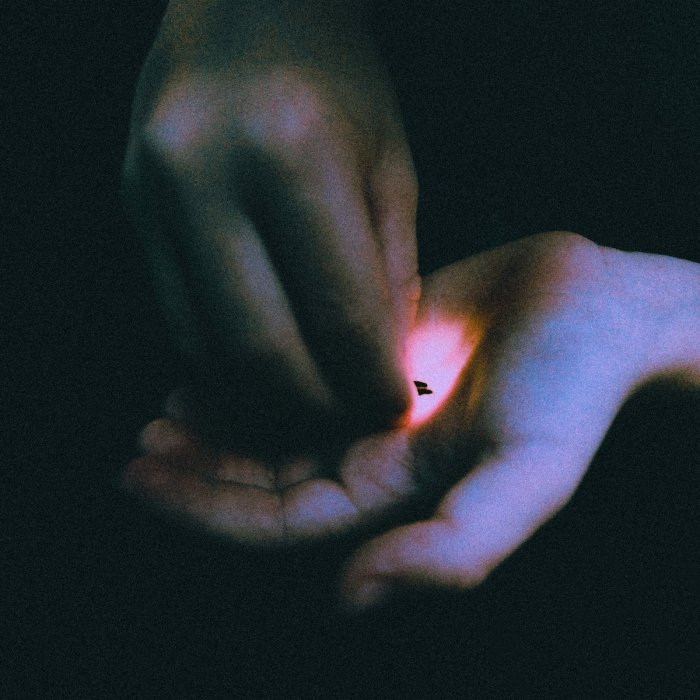 Brooklyn-via-Athens, Georgia post-punk band Bambara’s fourth album ‘Stray’ is a record all about death with words and themes ranging from the surreal and dark to the sublime and delicious. Their second album on Wharf Cat Records, it follows acclaim from Steve Lamacq and shows with Idles.

The intense and slightly industrial sound of ‘Miracle’ opens the record with slightly mumbly, almost spoken-word vocals amidst an intense fusion of noise: ‘She smokes out her window watching the sunset behind the figures of many trees, where a collection of broken wind chimes play wild drones in minor keys’. Following this is the more frenetic sound of ‘Heat Lightning’. This song finds the band following a man who rallies against a weatherman – and far more besides: ‘The radio turns to static. He stick his hand out the window and winces at the first drops of rain’. Although Bambara’s sound is nothing like The Hold Steady, there’s a similarity in the storytelling and richly drawn and deeply troubled characters who appear in almost every song. ‘Sing Me to the Street’ is more seductive than what has come before and reminded us of ‘Babies’-era Pulp mixed with Echo and the Bunnymen – albeit with more vocal interplay and extra tales of murder.

Energetic riffs and a killer bass line signal the start of ‘Serafina’, the jaw-dropping tale of a girl ‘with matches in her mouth’ and the ‘smell of gasoline in her hair’ who ‘was feeding leaves and branches to a pile of debris and dancing’. The song then recounts a conversation between the two characters: ‘What’s your name if you don’t mind. She said ‘My name is Serafina, but people call me Sera to save some time’. Well, I’ve got all the time in the world’. ‘Death Croons’ recalls the encounter between Death and an unfortunate individual where the phrase ‘Come on baby, let’s have some fun’ sounds rather sinister and ‘Stay Cruel’ is filled with vivid recounts of violence and powerful metaphors about ‘teeth shining bright like a beacon’. The short and sharp riffs that open ‘Ben & Lily’ perfectly capture the fractious relationship between the two main characters (‘what he did to my sweet Lily, she don’t deserve that one bit’). ‘Made For Me’ sounds a little lighter – at least in the synth-tinged instrumentation – than what has come before, although the opening lyrics are ‘I watched you cry again’.

The closing ‘Machete’ is all about a couple drinking cheap vodka with a dog at their feet and opening up about their anxieties and darkest desires over a galloping sound: ‘I see him in the window. Those big, pale eyes. I found a machete’…

With plenty for fans of The Murder Capital, Depeche Mode and The Cure to love, this is a record you won’t want to stray far from.