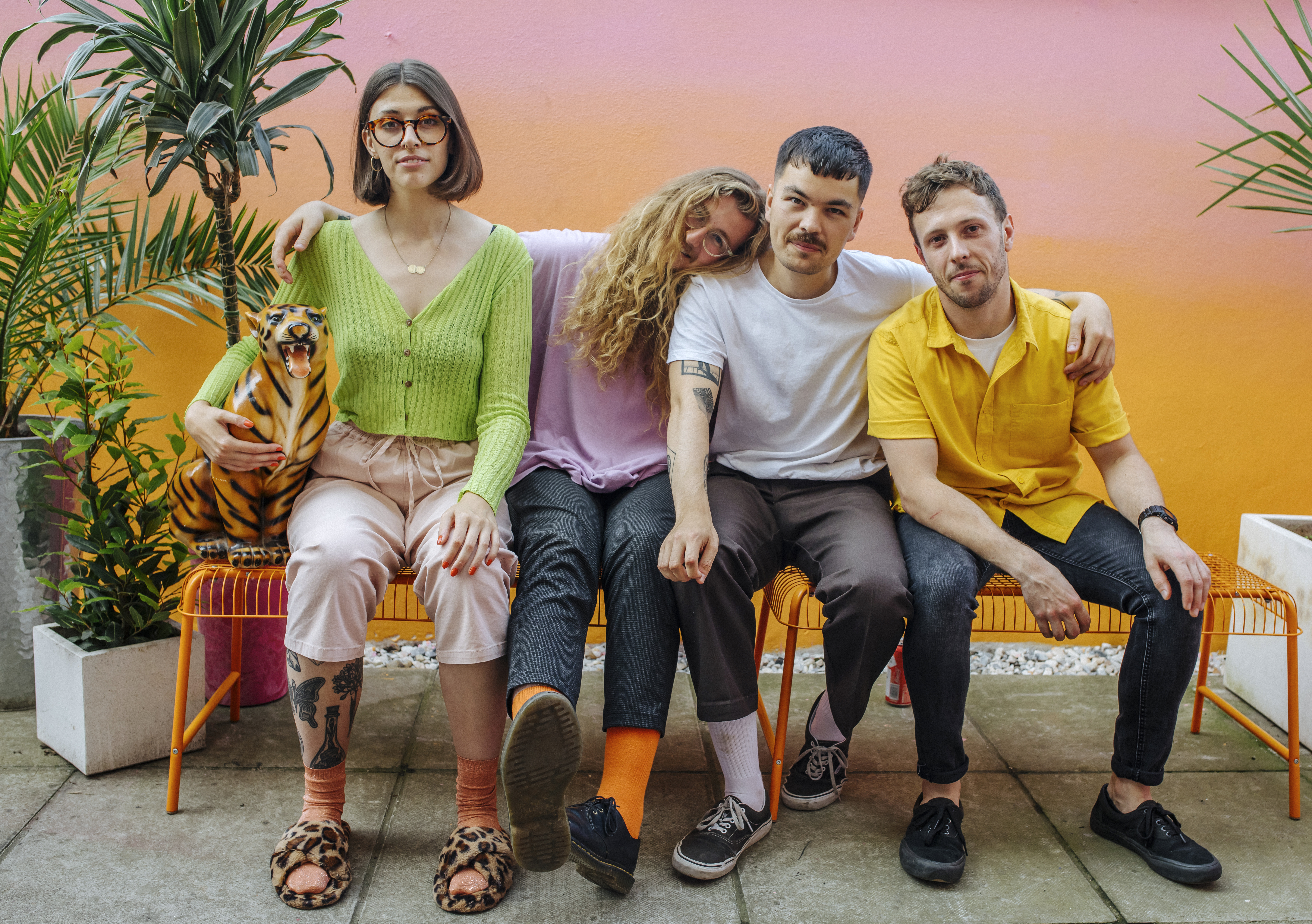 Orchards have been a favourite of ours ever since coming across them playing a tiny tent at Brighton’s Together the People festival in 2015. Five years later and the band have signed to Big Scary Monsters, toured with bands including Indoor Pets and are now set to release their debut LP ‘Lovecore’.

The record opens with the jaunty art-pop of recent single ‘Sincerely Overwhelmed’ –  a song that has long been a live favourite due to its power-pop sing-along moments, Dutch Uncles-esque time signatures and recognisable lyrics about anxiety and isolation: ‘It’s too hard to describe the mechanics of my mind’; ‘It’s clear you’ve been sincerely overwhelmed. You think you do but you don’t hide it well’. The mathy energy of ‘Burn Alive’ follows with Lucy Evers looking back on past mistakes: ‘I was a fool to trust you with this vulnerability’. ‘Sooner’, another song you’re sure to recognise if you’ve been to an Orchards gig, is next up and this song has killer hooks as Lucy pushes back at those people who belittle those who wish to follow their dreams and how they’ll be the ones to miss out when things happen: ‘You should have loved me’.

‘Girlfriend’ has a huge-sounding intro as Lucy rallies against objectification and embraces independence: ‘I could be your girlfriend, be anyone you want me to be. I could be your girlfriend but I’m already committed to me. Don’t make me accountable for your fragile ego’. The potent riffs and harmonies continue through ‘Stealing Your Sheep’ and ‘Magical Thinking’ (‘You ask me to choose between love and compulsion’) before ‘Social Sobriety’ takes a more incidental turn with slow-burning guitars and nature sounds. It falls somewhere between the psych stylings of The Flaming Lips and earnest, heart-swelling sound of Los Campesinos!

‘Remember when you walked me home and let me in and told me life would be better if we lived in sin’ opens ‘Vacancy’ with Lucy then demanding an answer to a defining and defiant question: ‘Am I a permanent fixture or vacancy?’ There’s a mixture of synths and clattering drums on the anthemic ‘Give Me’ while the penultimate ‘Luv U 2’ is a bop that will delight anyone who’s been a fan of the Brighton four-piece from near the start. The closing track ‘History’ opens with heavier ArcTanGent-style riffs and finds the band angry as they fight back against someone who is spreading lies as Lucy repeats the words ‘I want to know where you’ve been all night’.

‘Lovecore’ is an album you’re bound to love.