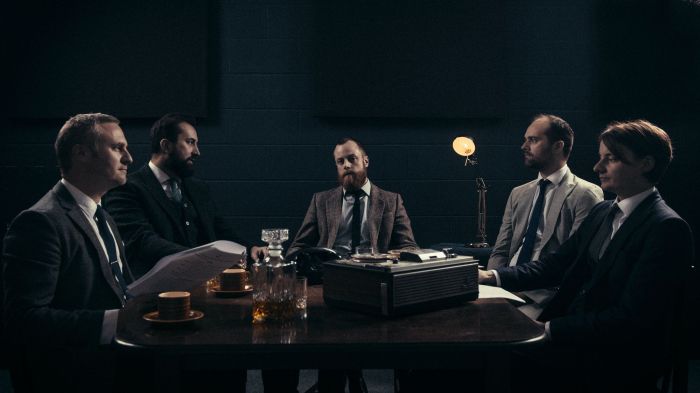 I LIKE TRAINS have returned with new single ‘The Truth’ – their first new material in eight years and the first song to be taken from new record ‘KOMPROMAT’ (out on 21 August via the newly founded Atlantic Curve label). The album deals with knotted themes of information and how hard it is to make sense of it in our current age of overload and bombardment.

Regarding ‘The Truth’, vocalist David Martin says: ‘It came from a list I was keeping over a number of months. I would follow the news and social media and add a line or two a day, so that it ended up plotting the news cycle over that period. The amount of information we’re fed on a daily basis is enormous. Everyone is so keen to “break” the news as quickly as possible that it becomes impossible to comprehend it and draw a meaningful narrative through it. How does this event connect to that one?’ Anyone who’s been a fan of ILT over the years will know how much the band values the visual aspect and this video – directed by Leeds-born artist and designer Michael Connolly – captures the claustrophobic, confusing and paranoid themes of the track.

Opening with an industrial goth sound that brings to mind Death in Vegas ‘Aisha’ and beats that recall Underworld, the song finds David declaring ‘I’m not here to make friends, it’s a means to an end’ before listing all the things the truth could potentially be as it veers off into a clattering post-punk direction: ‘The truth is not what it was, the truth is ready when you are’; ‘The truth is whatever you want it to be’; ‘The truth is a liquid lunch, the truth is your privacy is important to us’.

The song finishes with David offering an honest threat as he embodies those people in power who make grand statements: ‘The truth is you will never see me again and even if you did, you wouldn’t recognise me’

The Leeds band will also discuss the new record live across Facebook, Twitter and Instagram in an interview with journalist Simon Catling this Saturday (9 May) at 8.30pm BST.