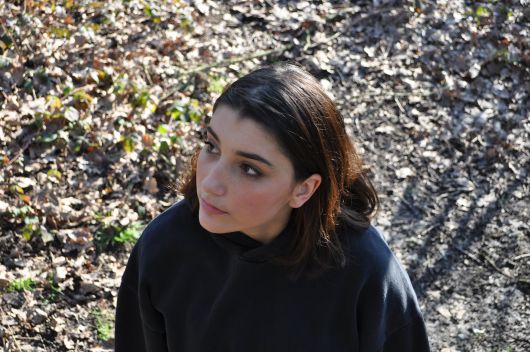 Eve Owen has released her debut album ‘Don’t Let the Ink Dry’. Produced by The National’s Aaron Dessner – and released via 37d03d Records, the label he runs with his brother and Bon Iver’s Justin Vernon – the record is packed with tales of heartbreak and longing set against backing that dips into a multitude of genres.

There’s an organic feel to the atmospheric opener ‘Tudor’ as the tribal drums bed around Eve’s sublime vocals. This continues through on ‘Lover Not Today’, a psych-pop tale of forlorn love with glitchy effects and subtle strings, and ‘Mother’, a song that finds Eve dipping her toes into the kind of chamber pop sound that serves Arcade Fire so well. Things head into darker, folky territory on ‘After the Love’ as Eve plays around with conventional structures and vocal interplay while getting political: ‘Wave your flags on the battleground’; ‘Point your gun at the sun’.

‘For Redemption’ is a slower affair with its goosebump-evoking melodies helping the harsh words resonate even more: ‘Think of me when you’re half asleep but don’t walk me home tonight’. The acoustic dream pop of ‘Bluebird’ finds Eve opening up about her sub-conscious stories (‘The land was my pain and you were the bluebird. I’m here for you’) while ‘She Says’ opens in twinkly piano-infused fashion before heading off into a poignant sound reminiscent of Sharon Van Etten: ‘Keep your promises I scream, keep your promises now I’m crying through the phone’. ‘I Used to Dream in Colour’ also has an alt-rock sound running through it as Eve speaks about her heartbreak with honesty: ‘I’ve been here one day and already things feel cruel’; ‘I used to dream in colours, now I dream in blues’.

A burst of Julien Baker-esque guitars signals the start of ‘Blue Moon’ with the words ‘I’ll never let you break ’til you clean up your mistakes and ‘Tonight you’re mine as long as you promise to stay’ hitting you in the feels. The album culminates with the ambient soundscapes of ’29 Daisy Sweetheart’ and the more inward-looking ‘A Lone Swan’ – a song that finds Eve embodying a character who is on the end of a cruel break-up that involved constantly being given the cold shoulder (‘Were we in love at all? I’m a lone swan’) and being cheated on (‘And you know the lipstick collar is not mine. I told you I didn’t wear pink when we met for the first time’). However, it’s the statement about family that will really grab you: ‘Just keep wishing that the kids are sleeping through it all, every night telling secrets to the neighbours that they hear through the walls’.