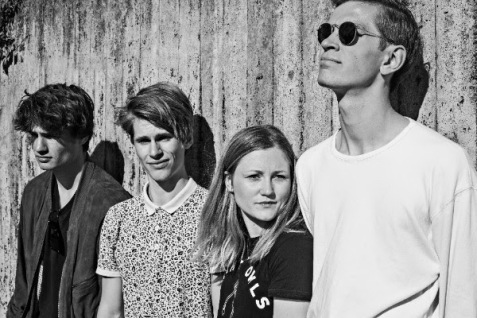 Sl0tface show just what great taste they have with a song named after the film that brought ‘Rex Manning Day’ to the world’s attention and manages to reference High Fidelity. Two of the greatest films about record shops ever made, you’ll want to join Haley Shea as she lays bare her dreams of working in a store full of vinyl. Brimming with breathless positivity in the vein of early Supergrass or Get Inuit, the opening finds Haley singing about how ‘Championship Vinyl will always have me and I’ll play bass for Sonic Death Monkey’ before easing into reality as she sadly reconsiders her life options: ‘Instead I’m poring over books. My eyes are tired, my heads hurt’.

The Yacht Club – ‘Put Your Life in a Box’

Dengfest favourites who are signed to Beth Shalom Records, the lead single from The Yacht Club’s new EP starts in twinkly fashion as the band pine for a lost love: ‘I feel your fingers slipping through mine when all we needed was time’. Combining the atmospherics of Foxing with the heart-on-your-sleeve emotion of Jonah Matranga, the song gradually builds up and there’s a surge in sound around the 3.20 mark. Emotive and anthemic, there’s real desire and yearning as Marcus Gooda sings: ‘I’m bending, I’m breaking’ and ‘I can’t miss you more’.

Ahead of a new album in the new year, Blackpool’s I Drink Therefore There’s Darkness’ ‘Romantic Discourage will appeal to fans of Oceansize, Foals and And So I Watch You From Afar. There are elements of math rock in the groove of the song while there’s also a more industrial edge seeping through. Described by the band themselves as ‘goth funk’, there’s also an ominous feeling as the band sing: ‘Anyone whoever dreams of happiness cannot procrastinate’.

Super Fan 99 Records have been building up quite a roster and it’s no surprise that Pitchfork-approved Free Cake for Every Creature (Katie Bennett to her parents) is another fine signing. Sitting somewhere between Phoebe Kreutz and Jenny Lewis, her voice is one of those that instantly grabs you. Oh so gentle, the song opens with a spoken-word intro about the time in life when you’re meant to be finding your way in the ‘real’ world (although we all know it’s not as simple as that – and it’s more fun to follow your dreams). She then goes on to sing how ‘All you got to be at 23 is yourself’ in a quiet protest against the will of society before rather beautifully – and subtly – stating: ‘I am 23 years old today, where’s my cake’. The DIY aesthetic just adds to the charm.

With dream-laden guitar hooks from the off, Sports Day Records’ Slumbers are a New York trio who specialise in hazy anti-folk. With rhythmic vocals also joining the fray, ‘Battle’ almost feels like a lullaby at times as its ethereal beauty gently pulsates into your brain. Bringing to mind everyone from Kimya Dawson and Laura Marling to Alex G and Jeffrey Lewis, the vocals and guitar gently hover over some soothing drums.